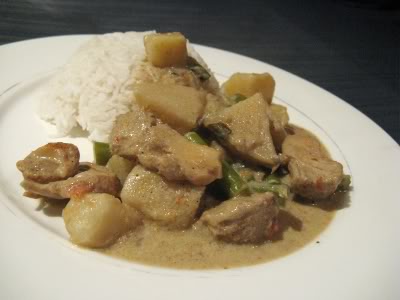 As Cindy just mentioned, the second birthday of Planet VegMel is fast approaching. To celebrate Steph recently announced 'that recipe seems very familiar', a blog event where VegMel bloggers make and post each others' recipes. Almost as soon as the event was announced, Cindy had started putting together a list of all the blogs and recipes that we wanted to cover by September 14th.

I got started on Saturday night with a recipe from the hosting blog itself, Vegan About Town. The recipe in question is a mock-chicken curry based on a classic Nonya dish that Steph remembered fondly from her childhood. We had no such nostalgic connections but this still won us over completely! It's easy to throw together and once it's all simmering away the house fills up with amazing spicy, coconutty smells. We used a mushroom-based mock-meat from Vincent's that did a reasonable impersonation of slightly chewy chicken. We also failed to buy snake beans, which we substituted with just ordinary green beans, meaning a bit less simmering was required.

Spooned over a pile of rice, this was the perfect comforting meal: spicy and smooth, with lots of tender veggies and chunky 'chicken' pieces. As soon as I'd finished I was counting down until lunch the next day when it was leftover time. Our first entry in 'that recipe seems very familiar' has set very high standards indeed.

Mix together the chilli flakes, garam masala and water until it forms a thick paste.

Fry the shallot and garlic in the oil in a large pot until it starts to brown.

Add the spice paste and the mock chicken to the pot and stir well, making sure everything is deliciously coated in spice paste.

Add in the stock, the curry and lime leaves as well as the potato and tomato. Add extra water if you need to - make sure that the ingredients are almost covered in the liquid.

Cover and simmer for half an hour.