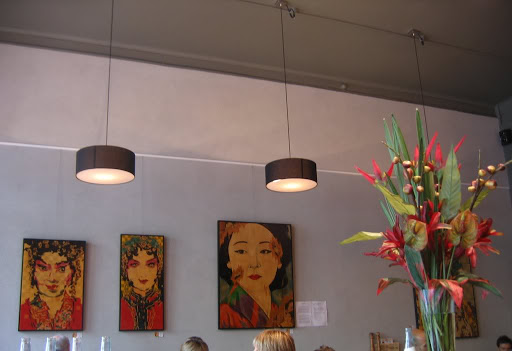 Stop the press! A where's the beef breakfast post in which I have a sweet breakfast and Cindy goes savoury! I've just spent 10 minutes skimming over forty-odd breakfast posts from the last 18 months or so and, amazingly, this is the first non-savoury breakfast I've eaten out since we moved to Melbourne. What came over me? Who knows - a lack of standout savoury vego options on the Filter menu, an enthusiasm for poached pear, a burst of unpredictability? Who can say? Regardless, I wound up eating pancakes, while Cindy chowed down on mushrooms on toast. Strange days indeed. 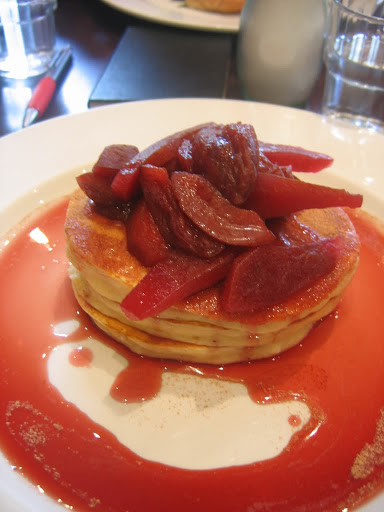 Filter's right in the middle of Brunswick Street, but was surprisingly empty when we turned up at 9ish on a Saturday morning. Things filled up as the morning went on and bleary-eyed trendsters made their way out of their houses for their morning caffeine and eggs, but we had a prime table and attentive service. As my rambling above indicated, I went for pancakes: ricotta pancakes with poached fruit and cinnamon ($14.50) to be precise. The pancakes were light and fluffy, and smothered in some sort of berry syrup and poached fruit (mainly pear, but maybe some plum as well - it was all stained berry coloured, so it was hard to tell). These were pretty good - although I think I've decided that the best sweet breakfast will always fall short of the best savoury breakfast from my perspective. If I want sweet, I'll stick to dessert. 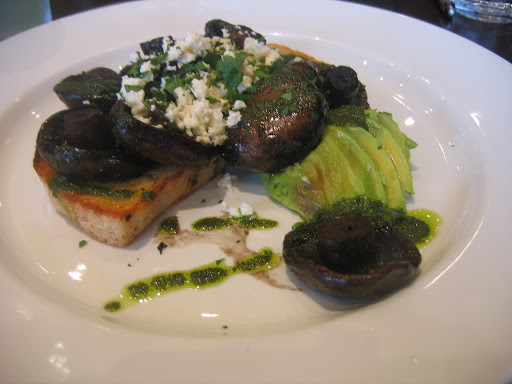 Cindy opted for something up my alley (although minus the eggs I require for sustenance!): mushroom, fetta and avocado on toast, with a basil dressing ($11.50). I had the last bite, which managed to include a bit of everything (it was a big bite). The avo was the star of the show for me, but it was all impressive - crumbly fetta, perfectly cooked mushrooms and a tasty basil pesto-y sauce. Throw in a poached egg and I'd have been in heaven.

Filter is a pleasant, reliable cafe, that doesn't seem to try too hard to be trendy - it's got some sort of hipness going on, but it's unforced. Throw in the pretty decent menu, the pleasant staff and the reasonable prices and it's a trusty place to fuel up before hitting the Fitzroy shops.

Edit 24/02/09: Fitzroyalty has just announced that Filter has closed. We're sad to see it go!

Read about our previous visit to Filter here.
Posted by Michael at 8:29 pm