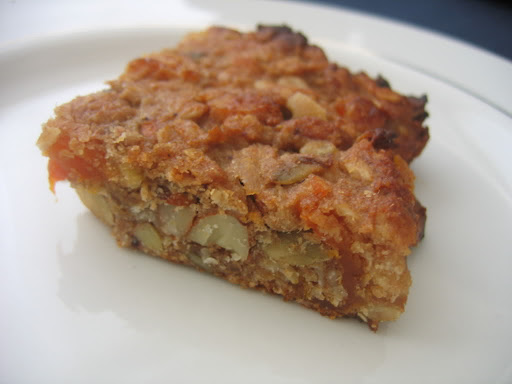 Old habits die hard, as evidenced by my afternoon snacking in the previous week: a packet of corn chips here, some peanut butter bliss balls there, an ice-cream somewhere in the middle, with a scattering of jelly lollies on top from a generous colleague. Time for some premeditated baking. The recipe of choice is a no-added-sugar slice with many incarnations, but the key ingredients are all fruit, nuts and seeds. It all started with Cassie from Veggie Meal Plans, but I was hooked when Kathryn of Limes & Lycopene added tahini to the mix. Then Johanna chimed in with a rave review of her own and it was obvious I had to give these a shot.
I find that tahini can be a bit of a love/hate ingredient - it tends towards sticky messy bitterness on its own, but it can lend a fabulous rich nuttiness when used judiciously. In my slice the tahini was borderline - in a couple of mouthfuls it was too pronounced, while in most others it was a very pleasing undertone. Obviously I need to stir things a bit more vigorously in the future, but I might try reducing the tahini a little at well (upping the dates just slightly to retain the moisture quotient). I think it'd be fun to try replacing it with other nut butters too. (Mmmm, cashew butter... so good but soooo expensive.) Dried apricots and almonds are my fruit and nut combination of choice, and I also added some leftover citrus peel. It was OK, but I shouldn't have messed with my favourite couple.
The surprise outcome is that Michael has enjoyed this slice at least as much as I have, meaning that stocks have disappeared only a week later. At least it's quick and easy to bake up another tray...
Fruit, nut and tahini slice

1/2 cup dried dates, diced
1/2 cup water
1/2 cup tahini (or try a nut butter)
3/4 cup rolled oats
1/4 cup spelt flour (or try another flour of your choice)
about a teaspoon of spice: I went for a mix of ground cinnamon, ginger, cloves, nutmeg and star anise
1/3 cup almonds, chopped (or any other nut you like)
1/3 cup pepitas (or another seed you're into)
2/3 cup dried apricots, diced
1/3 cup dried citrus peel, diced (replace these with a cup of any dried fruit)

Preheat the oven to 180 degrees C. Lightly grease a small baking tray.
Put the dates and water in a saucepan and simmer them for 5-10 minutes, stirring occasionally. It'll all mush into a thick mixture together. Take it off the heat and cool it a bit, then stir in the tahini.
In a medium-sized bowl, mix together the remaining ingredients. Pour in the date/tahini mixture and stir to combine. Press the mixture into the baking tray and bake for about 15 minutes, until golden on top and just browning around the edges. Allow it to cool before slicing.
Posted by Cindy at 6:42 pm