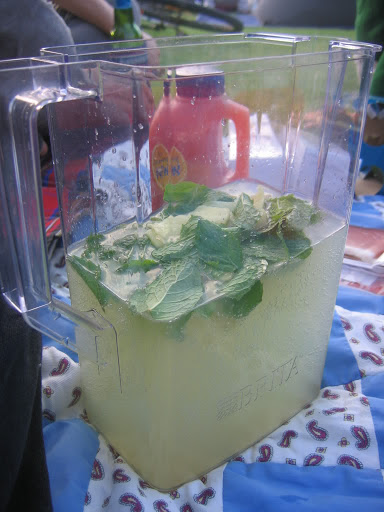 Michael's dips were a fine contribution to the picnic rug, and I couldn't resist making a few contributions of my own. After Michael's excellent cosmo-in-the-thermos work on the previous weekend, I ad-libbed my own cocktail to share: a bottle of limoncello and bottle of lemonade garnished with mint and sliced ginger. Simple, refreshing, and deceptively alcoholic. 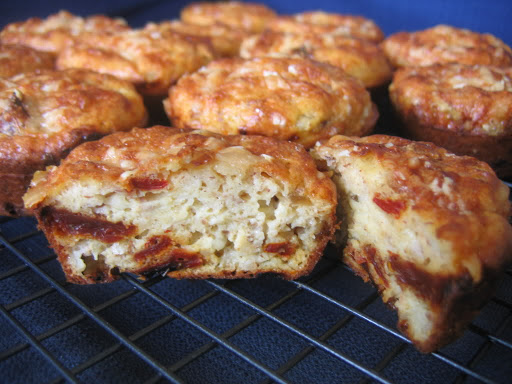 Johanna inspired me to make some savoury muffins, and her recipe came from Rose Elliot via a post on 101 Cookbooks. (What a pedigree!) With cottage cheese, eggs and almond meal, they're incredibly moist, almost as much quiche as they are muffin. I flavoured mine with parmesan cheese, sundried tomatoes and caramelised onions. They are perfect picnic food, and I think I'll be making this recipe again and again, perhaps experimenting with different flavourings. 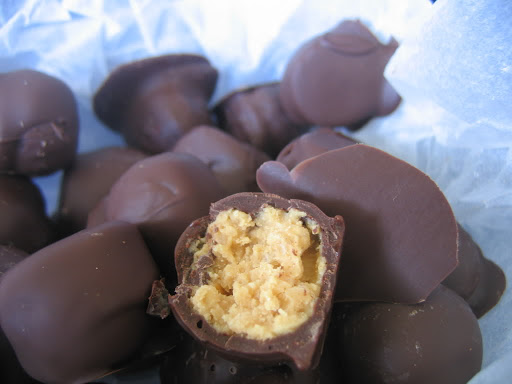 Once the films were underway, it was time to bring out dessert - peanut butter cannonballs from Yeah, That "Vegan" Shit. When I spent a semester studying in the U.S. in 2004, I got seriously addicted to Reese's peanut butter cups. We're talking coming-home-4-kilos-heavier kind of addicted. These might just be better. Inside the dark chocolate shell is soft sweet peanut butter, with little crunches of peanut and rice bubbles. Mine were kinda ugly shaped but this didn't diminish anyone's bliss, either at the movies or at work the next day when I shared around the leftovers. They are a tad fiddly and time-consuming to make, though, so my waistline's safe for now.

1/4 cup butter or margarine, at room temperature
1 3/4 cups crunchy peanut butter
1 cup icing sugar
1 1/2 cups rice bubbles
a shake of salt, only if the peanut butter has none added
up to 500g dark chocolate

In a medium-sized bowl, mix together the first five ingredients. Cover and refrigerate for 30-60 minutes, so that the mixture's firm.
Cover a tray with foil or baking paper and make room for it in the freezer (this is no small task in our house). Use a teaspoon to measure out small quantities of the peanut butter mixture and roll them into balls, placing them on the tray. Aim for balls of 1.5 cm diameter, and handle the mixture as little as possible.
I needed to do about three trays full but could only fit one in the freezer at a time. I put the first tray in the freezer for about 15 minutes and returned the remaining peanut butter mixture to the fridge. Once that first tray were firm, I transferred them to a lunchbox where I could store them more densely and returned them to the freezer. I repeated this process until all the mix was used up and I had a lunchbox full of sweet peanut butter. Continue to store them in the freezer until all of them have had a good hour in there.
It's difficult to know how much chocolate you'll need. Start by melting 250g of it and take it off the heat. Plonk a peanut butter ball into the chocolate and use two forks to maneuvre it until it's coated all over in chocolate, and keep going with more balls until your old foil/paper-lined tray is full of them. Return the tray and the lunchbox to the freezer for 10-15 minutes, then continue the staggered process of chocolate coating the peanut butter balls until they're all done. You may need to re-melt the chocolate or add some more along the way. I actually decided to double-coat the balls in chocolate which lengthened this process interminably.
These store well in the freezer if you're going to transport them somewhere like our picnic, but can otherwise be stored in the fridge. 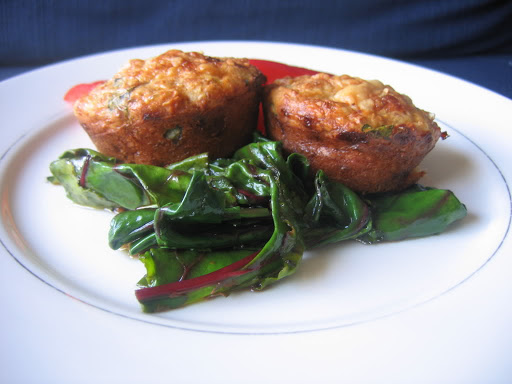 Postscript: On the following Wednesday night, I made another batch of the savoury muffins using the original sundried tomato and basil combination. I've had mixed results when baking with basil in the past, but it was all good here. We ate them with beet leaves (salvaged when Michael made his dip), sauteed in the oil that the sundried tomatoes were packed in.
Posted by Cindy at 6:42 pm