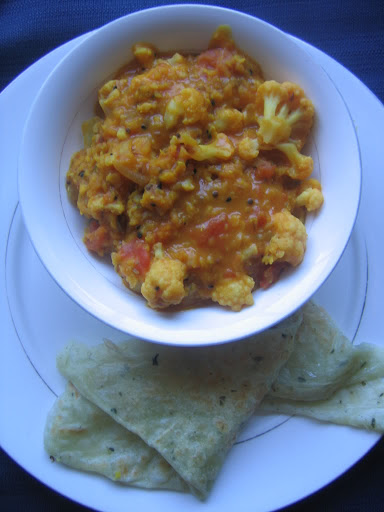 SBS has kicked off another run of weekly Bollywood films, giving us all the reason we need to indulge in weekly Indian dinners. The 9:30 start and typical length of Bollywood offerings meant that we decided to tape the movie on Sunday night and watch it on Monday evening. This week's musical marathon was Parineeta, a faintly ridiculous (yet seriously-toned) romance, which lacked the humourous sparring that is the key to our Bollywood enjoyment. Still, it gave us an excuse to sample this dal, which lives up to to Susan's raving.

Dal is tricky - it's almost always adequate: something liquidy and a bit spicy, perfect for soaking up rice or dipping bread into, but there are a lot of dal reicpes which really don't offer much more. This one does: the cauliflower adds texture to the mushy lentils, and the panch phoran (which we were introduced to by Dominique at Mondo Organics, but have strangely not blogged about) gave it a bit of a zest. This recipe is a great reminder to us to pull our packet of panch phoran out of the freezer occasionally. And although the cauliflower florets were tender stand-outs on the first day, on the second they collapsed into the dal for a super-thick and comforting meal. The spicy flavours developed further and it was fantastic with paratha. With five weeks of these Bollywood movies still to come, perhaps we'll be repeating this sooner rather than later.
Posted by Michael at 8:46 pm