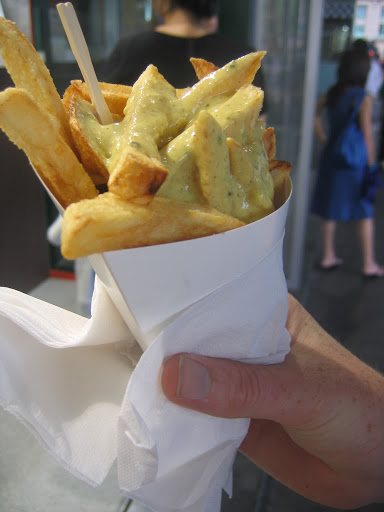 In 2008, Michael and I are stepping into the unfamiliar world of high culture with a subscription to the Melbourne Theatre Company. Thus, on seven Fridays in the next ten months, we'll be hunting for delicious dinners around the CBD that we can gobble down before the curtains rise at 8pm. I'm clumsily dubbing this series of posts Friday Featre Food. We've got a few ideas for future meals but we're also keen for your recommendations - casual or classy, just be sure it's tasty and timely.
First up, an old favourite with a new flavour: Lord of the Fries. They have a second outlet now at Shop 5 Flinders St Station, facing Federation Square. We picked up the $13.40 deal - an original regular-sized burger, a spicy regular-sized burger and a cone of chips. The night's sauce of choice? The Indian chutney/yoghurt mix. It was pleasant enough, but the Belgian mayonnaise holds a special place in my heart (or is that arteries?). We relaxed on the grassy south bank of the Yarra and watched the city suits drink themselves silly while we ate.
Also new to Lord of the Fries are breakfast burgers and hash browns. Coming soon to a where's the beef? post near you...

(You can read my original write-up of Lord of the Fries here.)

Edit 25/09/08: Drat! After all these months I was finally able to venture into the city on a weekday morning, only to find that the LoTF breakfast burgers are no more. They've scaled back to opening only at 10:30am with their standard menu.
Posted by Cindy at 6:44 pm