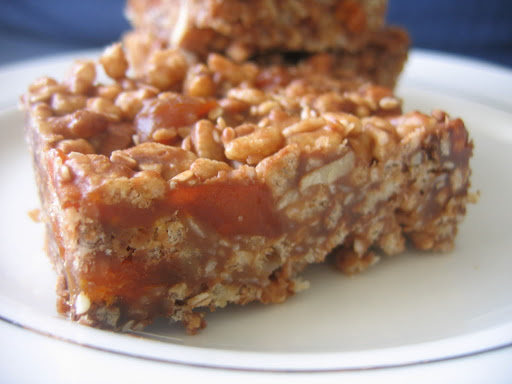 After my baking disaster on Wednesday night, I called for my Mum. But it wasn't quite the desperate and childish plea you might think - I just wanted the no-bake slice recipe that I so enjoyed as a kid. I figured it'd salve my sore ego, fill the snacking void left by the muffins, and use up some of the rice bubbles I recently bought.
What I've made here only bears a passing resemblance to my Mum's version, which itself bore only a passing resemblance to the original recipe that she emailed to me. It began as some kind of muesli bar slice, with toasted muesli and seeds. I think the toasted muesli may have been phased out of Mum's, and I don't ever remember encountering seeds. For my texture-intolerant brother, there was the bare-basics version: just rice bubbles bound together with the molten butter/peanut butter/honey/sugar mixture. I liked dried apricots in mine, and for an occasional after-dinner treat, it would be spread with a top layer of dark cooking chocolate.
My updated version retains the dried apricots and bring almonds into the mix. The binding mixture is hardly the stuff of nutritionists' meal plans, so I buckled completely and put some chocolate chips in. Those things are designed to hold their shape when chucked into a 200 degree oven but funnily enough melt all over the place here, so rather than than having golden bubbles with fruit, nut and chocolate dots, it's a more uniform caramel colour.

Rather than being a healthy afternoon alternative to the vending machine, I think of these as a slightly less guilt-inducing way of satisfying a genuine chocolate craving. The rice bubbles add some bulk, the dried fruit and honey extend the sweetness, and the peanut butter and nuts bring some richness so that only a small amount of chocolate is required. You could also make these vegan by replacing the butter with Nuttlelex, and the honey with another sweetener - maple syrup, rice syrup, golden syrup... maybe I need to taste the golden syrup version for myself! There are still a few more rice bubbles left...

Last minute edit: Heidi of 101 Cookbooks just posted a power bar recipe with a similar style. I would never have thought to add coffee to this but now I can't wait to try it!

Grease a medium-large tray. In a large bowl, stir together the first six ingredients.

Melt the remaining ingredients in a saucepan over medium heat, bring to the boil and then simmer for 5 minutes.

Pour the sweet butter mixture over the dry ingredients and stir to combine. Press the mixture into the tray and refrigerate for at least an hour. Slice into squares and serve.
Posted by Cindy at 9:39 pm