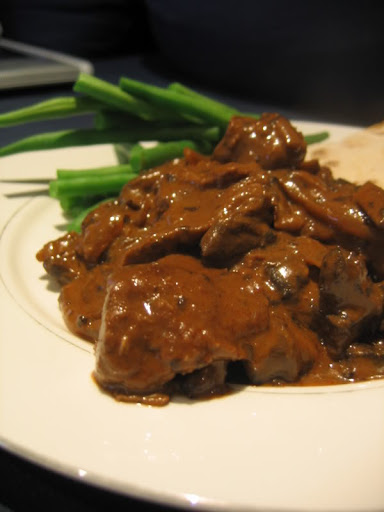 My new favourite food blog is Yeah, That "Vegan" Shit, written by the sass-tastic Lindyloo. When I should be concentrating only on my work, I have been sneaking peaks at her archives, checking out the awsome vegan food she and her feller create each weekend, and enjoying her casual and entertaining prose. It was only a matter of time (less than a week, actually) before I'd be trying out one of her recipes, and in this autumn weather it was the hearty mushroom paprikash that I gravitated towards. I've rarely eaten and never prepared savoury dumplings before, so I was keen to have a go at them (as if mushrooms in paprika-spiked gravy wasn't enticing enough!). Unfortunately my dumplings were an absolute disaster! That unmarked jar of flour in the cupboard was always going to be a risk: I could see that it was probably wholemeal, and in hindsight I suspect that it was also self-raising. My innocent-looking dough balls fizzed to almost nothing in the boiling water, and boiled over onto the stove. The paprikash was still delicious without them, for dinner and then reheated and stuffed into a bread roll for lunch the next day.
I'm ashamed to admit that even with these incredible vegan recipes in front of me, 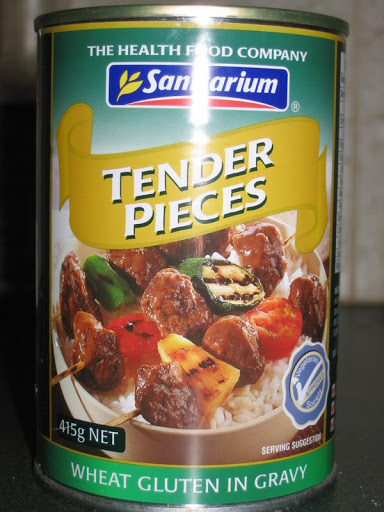 I still lazily subbed some dairy (butter, sour cream and milk). I really need to seek and trial some of the vegan alternatives lurking around the supermarket, I know that at least some of them are there! I did, however, trial Sanitarium Tender (wheat gluten, aka seitan) Pieces for the first time. They're canned chunks of imitation red meat packed with a bit of gravy, not as rubbery as some mock meats but rather bland in taste. They suited this dish but really aren't necessary- fleshy mushroom chunks and soft onion loops are more flavoursome and can certainly hold their own.
Mushroom Paprikash

Combine the sour cream, flour, pepper and salt in a small bowl and set aside.
Heat the oil in a large pot, and cook the onions and garlic for a couple of minutes. Add the paprika and chilli and cook for a minute more, slathering it all over the onions. Add the mushrooms and get them coated in orange-spiced goodness too. Add the stock, bring to the boil, and then simmer for about 20 minutes.
Stir through the sour cream mixture and the seitan, if you're using it. Cook further just until heated through. Serve with pasta, bread or dumplings (if you're more skilled than I) - steamed green beans proved to be an excellent sidekick.
Posted by Cindy at 9:05 pm