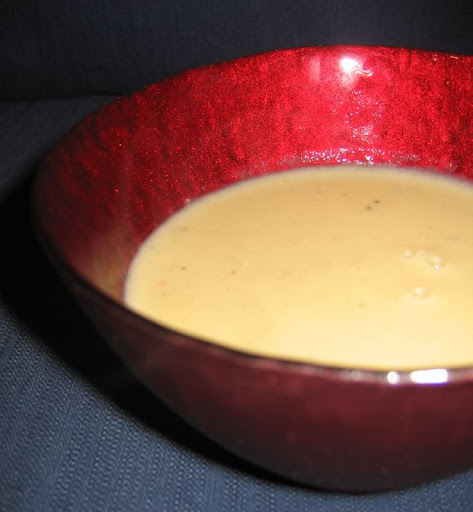 The main reason for our trip to the Queen Vic Markets on Sunday morning was to hunt down Jerusalem artichokes which, it turns out, are neither from Jerusalem or from the artichoke family. Regardless, I'd read that they made a tremendous base for a soup, and some quick googling turned up this recipe at Cook Sister! 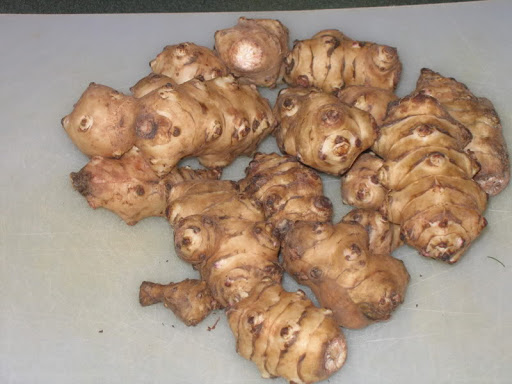 We managed to locate some of the 'artichokes' at in the organic section of the markets (I've since noticed that they're everywhere at the moment) and rounded up the rest of the required ingredients. The recipe is pretty simple, although peeling half a kilo of Jerusalem artichokes is a bit painful. Still, once the potato and artichokes are peeled and roughly chopped, it's plain sailing. A bit of frying, some boiling in stock and a quick run through a food processor and you're ready to go.

The end result was a fine soup. The 'artichokes' added a subtle but distinct flavour. It's hard to describe - I wouldn't really compare it to regular artichokes, but can't offer up any better point of comparison. The addition of the brandy was probably unnecessary - I didn't really taste it in the final product and we're now stuck with most of a bottle of very cheap brandy (any ideas on how to use it in cooking would be appreciated), but the cream was a worthwhile addition - smoothing the soup out and adding a bit of richness. Throw in a loaf of walnut and rye bread from one of the QVM bakers, and you've got a comforting and delicious winter meal.

Once again, for those of you who want to try this out, and I recommend that you do, the recipe is here.
Posted by Michael at 8:08 pm