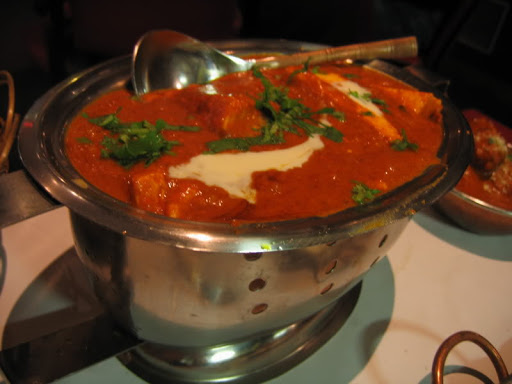 Regular readers (both of you!) might have spotted a recent comment from Dmargster, having a friendly dig at our attachment to the inner north and naming their favourite local (Ripponlea) Indian restaurant in the process. With swift service that would hands-down beat our local, we paid a visit to Ripponlea a mere four days later! On our free and easy Saturday night, we mapped out an excursion to the south side for dinner at Bala Da Dhaba, followed by a movie at the Classic Theatre.
I'm the kind of girl who would prefer that 'my local' is my lazy-glutton-night Indian or Thai restaurant around the corner rather than any watering hole. Thus, I was quite chuffed that Dmargster shared this kind of affection for Bala Da Dhaba and it had just the unpretentious atmosphere I'd want from my local. Picture a dated brick building with disposable paper tablecloths over the real ones, vinyl padded chairs and scattered Indian paraphernalia on the walls. The most striking feature is a small windowed room where two of the kitchen staff prepare and cook naan and meat at the tandoori oven. Michael and I were seated up against the window into their oven-space and I attempted to take a couple of sly photos. Unfortunately I failed to turn off the flash, yielding a bright reflection off the glass and the attention of the guys at the oven. I shyly took one or two more flashless pics (all blurry - sorry!) and tucked my camera away, my cheeks burning as hot as the bricks that were shielding our legs from the oven. It was still pretty fun to see the huge skewers of orange meat descend into the black depths, and the fast, skillful rolling and cooking of the dough balls into charred, fluffy bread.
There are about a dozen vegetarian dishes on the menu, and it's also worth noting that Bala Da Dhaba has a page of specials (somewhat unusual for an Indian restaurant, I think). This is where Michael chose his Paneer Akbari from ($12.90, pictured above) . I decided to test the restaurant's baseline with one of my favourite dishes, the Malai Kofta ($9.40). Of course we also had to test the labours of our neighbours and we requested a garlic naan too ($3). 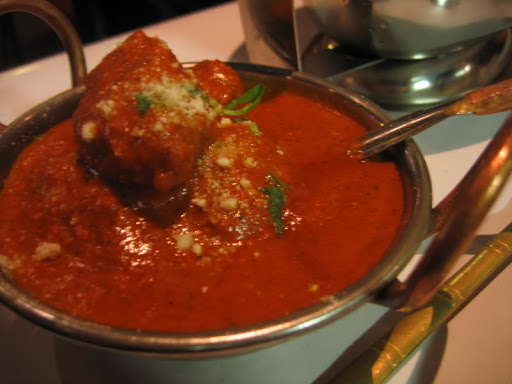 It was fortunate that we had the oven to entertain us for a bit, because the service was pretty slapdash. Menus were proffered only after I made eye contact with the head waiter, and our bottle of water and complimentary pappadums arrived after our orders were taken and the drinks arrived. But the mains were served very quickly after that, taking only about 10 minutes. Michael's Paneer Akbari was huge, though not quite as huge as it looks - it was served in a dish ~3 cm deep and kept warm by concealed tealight candles. He thoroughly enjoyed the sweet, tomato-y gravy and quite frankly, ate a lot more than he should have. (I think I can say that because he groaned all the way to the cinema!) The kofta balls were submerged in a similarly sweet and delicious gravy, the kofta were on the tough side of tender but more importantly were studded with cashew pieces. Finally, take a look at that naan - have you ever seen a naan smothered in so much garlic ghee? It was quite the treat - really, our entire meal was an exercise in exotic junk food, but it was a satisfying one. You'll have to look elsewhere for a measured review of their cheese-less dishes! 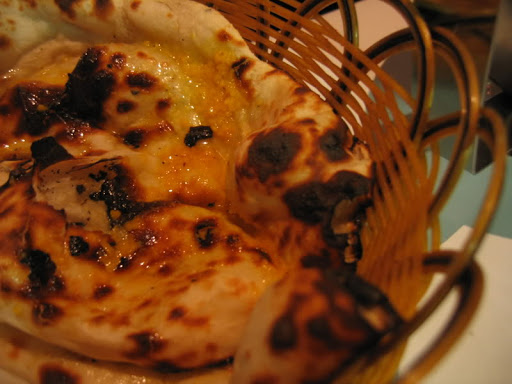 Bala Da Dhaba is probably not the kind of restaurant to repeatedly cross town for, but it has the comforting, scattered atmosphere and smiling staff I'd want at my local. I'd be pretty pleased with myself on the day that my regular custom resulted in a nod of recognition at the door.
Address: 56-58 Glen Eira Rd, Ripponlea
Ph: 9523 8683
Licensed and BYO
Price: veg mains $8.90-$12.90, rice and bread extra
Posted by Cindy at 8:53 am