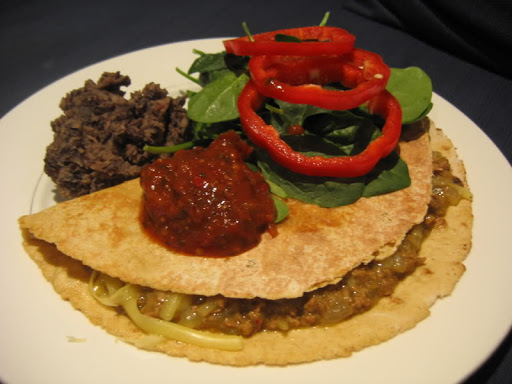 This is a hodge-podge of a Mexican-inspired meal that evolved from a number of ingredients that Michael and I have picked up over the last few months. Remember the crazy-rich dulce de leche I bought from Casa Iberica a while ago? On the same visit I found a little tetra-pack of tomatillo broth, while Michael got keen on dried black beans.

Michael transformed those little black pellets into the refried bean mush above, and I set to work on a taco thing. The broth was more like a thick sauce, so it became the main binding for our taco filling. Substance and spice came from some TVP mince, finely chopped onion and the Spanish Creole Adobo spice mix we bought at the Food & Wine Festival (containing "spices including cumin, smoked and sweet paprikas, chilli, garlic"). This would have been a pretty tasty taco if we'd stopped there, but the wow! ingredient for me was the Old Time Bakery organic corn tortillas we got from Macro Wholefoods in Richmond. These have a wholesome and filling taste and texture that leaves the processed brands at Safeway for dead. Now I want a packet of these preservative-free wonders in my pantry at all times! The meal was completed with a dollop of the salsa I bought at the Allergy Block Open Day, and a handful of salad. If you're interested in recreating any of this at home, here's a haphazard guide:

Re-fried black beans
Soak the dried beans in water for 2-4 hours. Drain, then simmer in fresh water for about 1 1/2 hours, until tender. Drain again, then follow Michael's previous recipe for refried beans.

Tacos
Rehydrate a cup of dried TVP mince in a cup of hot water and leave for about 10 minutes. Finely chop a small onion, grate about a cup of cheese and prepare a side salad while you wait. Heat a bit of vegetable oil in a frypan, then add the onion and fry for a few minutes, until soft. Add the TVP and stir it around to combine it with the onion and heat it through. Add a couple of teaspoons of taco spice mix and stir to coat the mincy mix in flavour. Pour in about 1 1/2 cups of broth and simmer for 5 minutes.
Briefly heat some tortillas in a dry frypan or a microwave to soften them. Spoon a layer of the taco mince on half of the tortilla and top with grated cheese. Fold over and serve with a side salad and salsa.
Posted by Cindy at 7:57 pm