This week brings Michael's birthday and with it, an excuse to splurge on a special meal. After seeing Andrew McConnell judging a charity cook-off last month, we checked out the menu of his Carlton restaurant Three, One, Two and discovered that a vegetarian degustation menu is on offer on Saturday nights. We were both pretty keen for a multi-course meat-free gourmet extravaganza, and my credit card gave its blessing. Unfortunately at 3-4 weeks notice they were all booked out but I optimistically put my name down on a waiting list. I was thrilled to get a call from the restaurant on Thursday: there had been a cancellation and they could fit us in, though we would be dining at the (apparently inferior) chef's table. (For a fleeting moment, I had a bizarre vision of the captain's table on a cruise ship, and wondered what could possibly go on at the chef's table - gritty gossip with McConnell, perhaps sledging Stephen Downes or other celebrity foodies...?) On our arrival we discovered that the chefs' tables are behind the main dining area, sharing a wall with the main kitchen and a room with the two chefs who plate the non-heat-treated dishes. The area is still meticulously decorated and we were very well attended to by the wait staff. I actually enjoyed watching the chefs plate the meals, getting a sneak peek at what might be to come, and I was probably more relaxed here than I might have been in the slightly more formal main dining area.
Michael says: I'm always (i.e. both times) a little uncomfortable settling into a swankier restaurant. The attentive staff and slightly formal air make me feel as though I'm going to say the wrong thing or make a horrible social faux pas (like unfolding my own serviette). Thankfully, the staff don't take things too far and I relaxed into things fairly quickly, helped by the limited choices demanded by the degustation format. Indeed, I put myself completely in the restaurant's hands, opting to sample matched wines with 5 of the courses. Our only choice was whether or not to include the cheese plate in our night's eating. With the whole meal going on Cindy's card, it seemed silly to refuse the cheese for the sake of mere dollars.
Aromatic pumpkin soup with peppers de Padrón 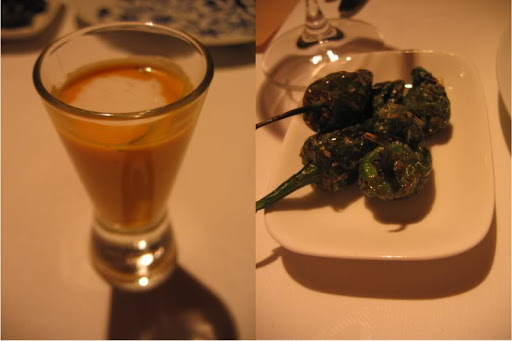 First up were shot glasses filled with pumpkin soup. But not just any old pumpkin soup - the richest, most mouth-watering pumpkin soup I've ever tasted. I think a whole bowl full may have ended up being too much, but this portion size is clearly designed to leave you wanting more. Cindy and I briefly tried to figure out what had been included to produce such a deeply flavoursome soup, but after deciding that a particularly delicious stock was involved, we gave up and just enjoyed it. The soup was served with peppers de Padrón. The waitress told us that they were generally mild and sweet, but that the occasional one was a bit spicy. After a quick google, I've seen them described as "a form of culinary Russian roulette," which probably sums them up better. I chowed down on three of the four on offer, assuring Cindy that they were mild and tasty. Of course the remaining pepper was the 'loaded' one and Cindy bravely bit her lip while our water glasses were being topped up before bursting into a fit of coughing and eye-watering once the waitress had left. It was a tad unfortunate. Unfortunate and funny. 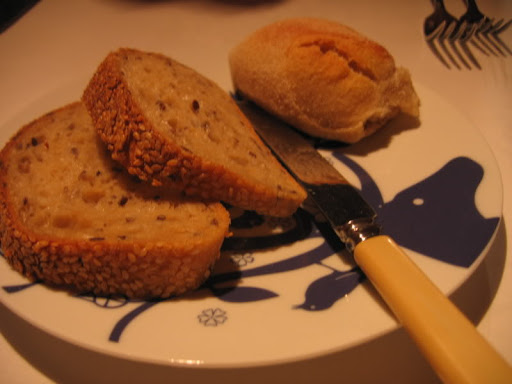 Thankfully the bread and butter turned up at this point and this eased my flaming throat, along with what was probably a glass and a half of water (it was difficult to tell since my glass was never actually less than two thirds full, what with the attentive topping-up).
Heirloom beetroot, horseradish & goats curd
(paired with 2005 Guy Bossard 'Cuvée Classique' Muscadet, Sévre et Maine, France) 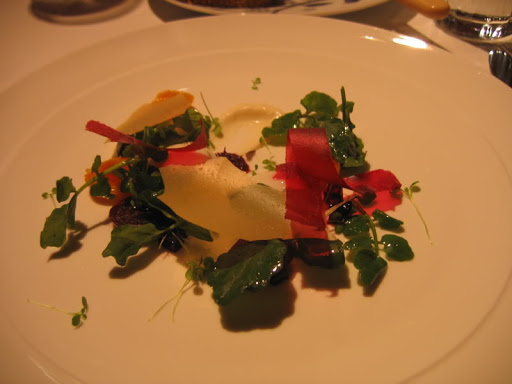 This salad is probably the most 'molecular gastronomy' dish I've ever eaten. The beetroot was first most recognisable as a scattering of tiny sliced circles of crimson and yellow, probably roasted and true to their natural texture. Then it appeared as tiny cubes (less than half a centimetre in dimension) of beetroot jelly and third, a couple of ribbons of dehydrated beetroot. Crisp as dried pasta, these were much more thinly sliced and they almost melted on the tongue. Even more astounding was the dehydrated garlic, resting all innocently like a shard of parmesan. Imagine the taste of roasted garlic, squashed and squashed of all moisture and transformed into a ultra-intensively flavoured miniture pane of glass. It was very cool. The goats' curd also received its own little makeover, appearing as a smear of creamy dressing, and then set into two 'bubbles': again creamy on the inside, but with a membrane that allows you to puncture it with your fork or pick it up whole and let it burst in your mouth. What a dazzling array of textures! As you can see, though, it was hardly filling and we were eagerly anticipating the next course once again.
Warm artichoke and mushroom salad with nettle puree
(with 1999 Leo Buring Riesling, Clare Valley, Australia) 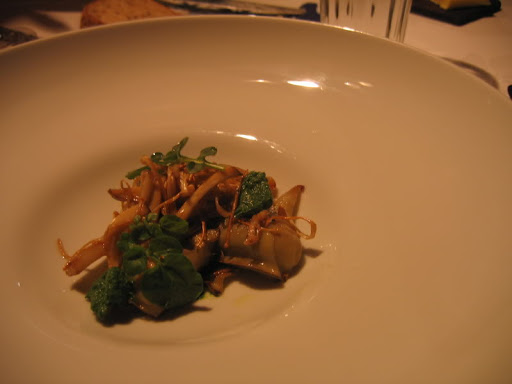 The hits just kept coming with this combination of tender artichokes and baby enoki mushrooms, served up warm with a few generous dabs of pureed nettle. The nettle puree was the key - bright green, salty and the perfect partner to the vegies, particularly the artichoke. Again, the small portions meant that the strong nettle puree was gone before it started to get overpowering. To be honest I can't really remember the wine - it was supposed to be warm and honeyish I think, but my focus was really on the food at this point.
Five spice silken tofu
(with 2006 Freemans 'Fortuna' (white blend), Prunevale, Australia)

Things were in full flow at this point, with the first three dishes all hitting the mark. The degree with which we were looking forward to our next course is best summarised by the lack of a photo to accompany this section of the post. I can blame my ongoing wine consumption, but Cindy has no such excuse. I think this was the first of our two 'mains': a cube of tofu coated in five-spice and carefully fried so that there was a crisp outer layer and an almost liquid centre. Accompanying the tofu was a gourmet interpretation of kim chi - shredded cabbage with a slightly vinegary and chilli sauce, along with a citrus-y green puree that we guessed was based around lemongrass. The tofu was tremendous (although not an order of magnitude better than Cindy's efforts) and the dish was made by the combination of spice, vinegar and citrus that added the flavour. The five-spice was a little less present than I had hoped, but this was still a success and had me looking forward to what was to come.
Gnocchi with walnuts, truffle and truffle vinaigrette
(with 2005 Curly Flat Chardonnay, Macedon Ranges, Australia) 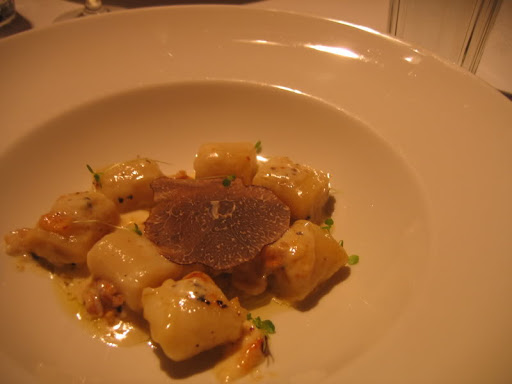 Although it was certainly very tasty, this was probably my least favourite dish of the night. My main complaint is that the sauce was unrelentingly thick and cheesy. The gnocchi were good, but not incredible (Mike B, you make lighter, fluffier gnocchi than McConnell's staff!). I couldn't really taste the vinaigrette, but the wafer-thin truffle slice was delicate and delicious. The paired chardonnay was really strong (I'm so not a wine critic, don't you know?) and effectively cut through the dominating cheese. After I'd finished this plate, I was glad that the procession of savouries had peaked because for the first time I could sense that my stomach was filling up. 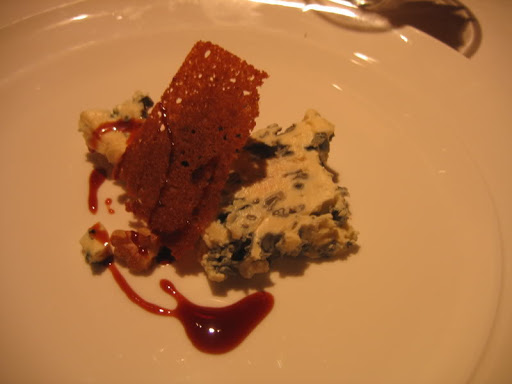 I am not a fan of blue cheese. Like olives, I think I can understand what the appeal is for a foodie, yet I can't genuinely enjoy it myself. However, like coffee, I'm now thinking that I could develop quite a taste for it by starting with some really good stuff. This blue cheese was quite strong but also very, very creamy. The sweet quince, tangy sauce and accompanying honey-spiked sauternes taught me just how blue cheese can and should be enjoyed.

Lemon chiboust with vodka granita and poached rhubarb
Those two cheese-heavy dishes must've slowed down my brain function, 'cause again I forgot to take a picture of this course. Imagine a small and sophisticated ice-cream sundae. At the top was the fire-and-ice cleansing of a teaspoonful of vodka granita. Then a few aromatic saffron threads balanced on a single 2-inch cord of poached rhubarb and a whipped flavoured cream. The cream was sweet, but had another subtle note that we didn't recognise, something almost herbal but entirely complementary. Further down was some crunchy, chewy crumbled semolina cake and the 1-inch cube chiboust, a whipped egg-white cream flavoured with lemon zest. This entire dish barely filled the glass to half-way and it was a tart and refreshing follow-up to the gnocchi and cheese courses. 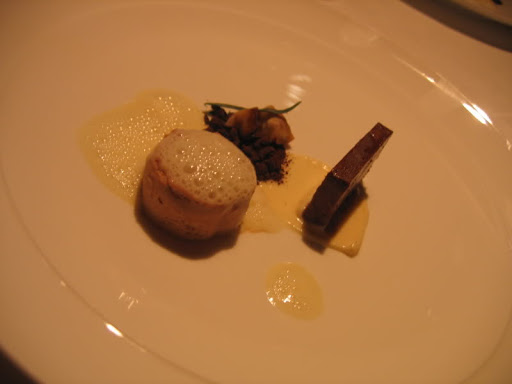 The big finish was suitably impressive: rich chocolate ganache, malted milk chocolate parfait, some crumbled chocolate, a tiny sprig of tarragon and a drizzle of parsnip cream. It summed up the meal, a smattering of classic stuff done really well (ganache), some slightly interesting twists (frothed milk and parfait) and a few wacky ideas that work really well (parsnip cream and tarragon). The accompanying wine (Bress 'The Kindest Cut') was a great match - sweet without being cloying - as refreshing as it was desserty. It was a fine finale, leaving me completely satisfied without feeling like my stomach was going to explode. 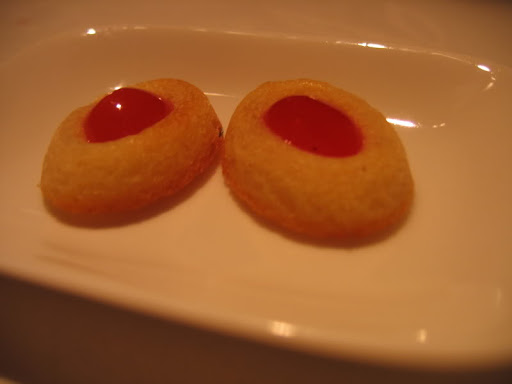 Michael was so non-explosive that he ordered a coffee, and we received these cute little almond biscuits. As he sipped, he asked ruefully and rhetorically, "How will we ever enjoy another meal again after this?" It was probably the chardonnay (or the riesling, or the sauternes...) talking, but I knew what he meant. We'd been treated to a parade of fascinating tastes, textures and arrangements over the course of three hours. Even a fancy three-course meal seemed monotonous and heavy by comparison. We're not really sophisticated connoisseurs of high-end dining, but I think it will take a lot to find my own birthday dinner to match this one. Maybe if I'm lucky Three, One, Two will have a new season vegetarian degustation by then.

Updated (29/6/09): Andrew McConnell has packed up Three, One, Two and opened Cutler and Co on Gertrude Street in Fitzroy.