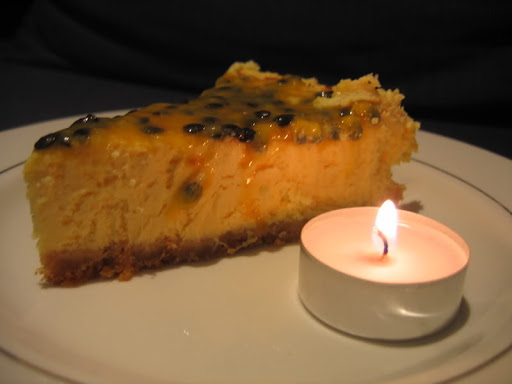 For a couple of years, I let Michael pick his birthday cake from the Women's Weekly Children's Birthday Cake Book (a timeless classic for all ages and almost thirty years old!). Then the train cake almost undid me with stress and I restricted Michael to less imaginatively shaped and more grown-up birthday desserts. This year's selection was the passionfruit cheesecake from Nigella Lawson's How To Be A Domestic Goddess. After canned passionfruit pulp let my yo-yos down, I made sure there was time for a trip to the Queen Vic Markets on Sunday morning for the fresh stuff. It was well worth it, though if I made this again I'd probably double the lime juice for even more tang. Otherwise it's just what you'd want and expect from a baked cheesecake: a buttery biscuit base and dense, smooth and rich cake. A little goes a long way, and a lot would make a filling but very naughty dinner (oops, did I say that out loud or just think it?).

This cake needs a bit of prep before you really get cooking and I only got one out of three right. If you're going to give this a go, make sure:
1. You make it a day early. It sets well in the fridge and is easier to serve when it's firm.
2. You've got a roasting dish bigger than your cheesecake tin. This baby gets a water bath as it bakes.
3. You take the cream cheese out of the fridge an hour early to soften. I beat too little while it was cold and didn't get it quite smooth enough. Once the batter was done I ended up straining it to get the clumps out. It turned out fine, but it's sure a nuisance to do (thanks to birthday boy for patiently pouring while I strained).

The recipe makes 8-10 serves and far from tiring of it, Michael gave me an excited thank-you every night the leftovers came out for the rest of the week. Even so, it'll be a while before I allow myself another week-long cheesecake binge. 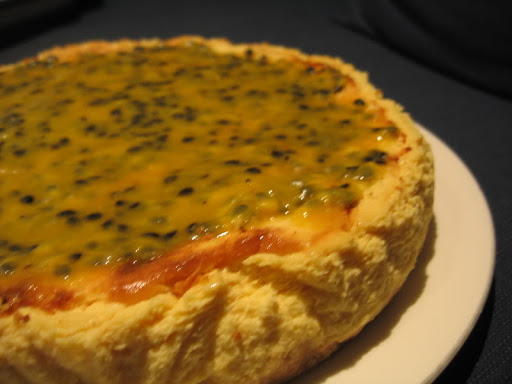 Take the cream cheese out of the fridge an hour early to soften.
When the cheese is ready, preheat the oven to 170 deg C. Line a springform tin with foil and make sure it's a thorough job - I used two pieces. Crush the biscuits - I put them, four at a time, between two layers of baking paper and smooshed them with a rolling pin. Transfer the crushed biscuits to a small mixing bowl. Melt the butter in a small saucepan, then stir it into the biscuits. (Don't worry if the mix looks a little dry.) Pour the base mixture into the cake tin and gently press it evenly across the bottom of the tin with the back of a spoon.
Scoop six of the passionfruits into a food processor and take 'em for a spin. Strain out the seeds. Hopefully you'll have about 100mL of passionfruit juice remaining. Put the cream cheese into a large mixing bowl and beat it until smooth. (Do it properly, otherwise you'll end up with lumpy bits in the batter. And have to strain the goop later like I did.) Next beat in the sugar, then the eggs and yolks one at a time. Get rid of the electric beater and start hand-stirring, adding the cream, the lime and passionfruit juices. Stir until only just combined.
Pour the cheesecake batter into the cake tin and place it in a larger roasting pan. Boil a kettle-full of water and pour it into the roasting pan, so that it goes half-way up the springform tin. Carry it carefully to the oven and bake it for about an hour until it's set and has browned a little around the edges. Nigella says it should still have "a hint of wobble".
Cool the cake out on the bench for a while, then refrigerate overnight before unmoulding. Scoop the remaining passionfruit over the top to garnish.
Posted by Cindy at 12:15 pm

Labels: Dessert, How to be a Domestic Goddess, Nigella Lawson