Fear of food-overload had kept me from joining Cindy's Saturday morning jaunt to Allergy Block. With the Melbourne Food and Wine Festival in full swing, Cindy had booked in the Flour Festival and Wicked Sunday to follow on from our Friday evening cocktails, and the weekend was rapidly shaping up as a bit of a feeding frenzy. The International Flour Festival at Fed Square promised to be one of the few events of the Food Festival that catered easily for both vegetarians and those with more Cheap Eats than Good Food Guide budgets, so I was saving myself to feast on flour. 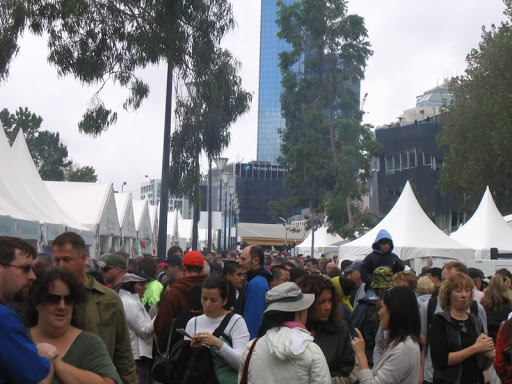 The main action was down by the Yarra, with food stalls crammed along both sides of the footpath and swarms of people exploring the culinary options. In keeping with the flour theme, there were a good number of bakeries represented, along with pizza stalls, Indian, African, Mexican and Japanese places all serving up at least some bread-based options and a few completely non-flour related stalls selling things like gelati or cheese. It really seemed as though the theme should just have been 'food' rather than 'flour', but perhaps that'd be a harder sell.

I was ravenous by the time we arrived and dived straight in to the queue at the Yuzu Japanese catering stand. It turns out that Yuzu catering are the people who run Ume Nomiya, a Gertrude Street restaurant that I've been meaning to check out for ages. And having tasted the Japanese Sun Balls, I can almost guarantee that we'll have eaten their before Easter. They were delicious: little balls of rice, caramelised onion and shitake mushrooms fried to crispiness and served with pickled plum mayonaise ($8). A fine start indeed. 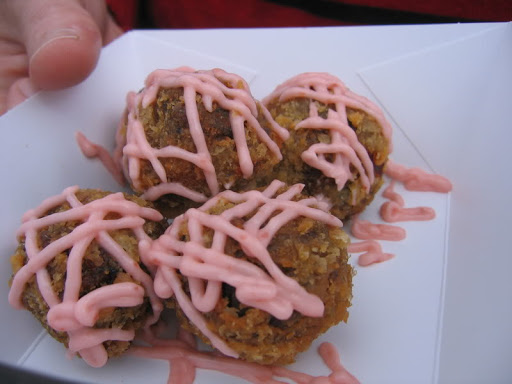 We battled our way through the throngs of people checking out most of the offerings. Cindy wanted to wander all the way through before we ate anything else, to make sure we didn't fill up too quickly and miss out on something special. When I started thinking about buying a $25 cheese showbag, we quickly realised that I'd need to eat something else immediately or end up with a backpack full of takeaway treats. 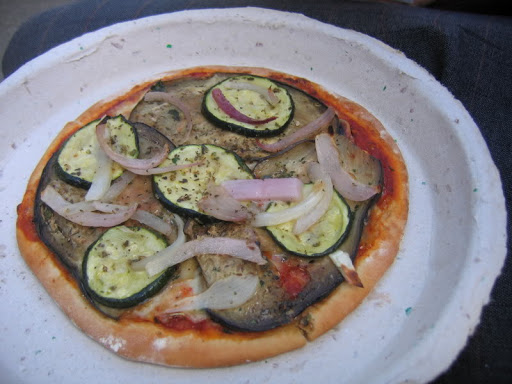 Luckily, Pizza Farro was on hand serving up pizzas made using spelt flour and topped with a range of unusual flavour combinations. I went for the Melanzane ($8.50), which combined eggplant, zuchinni and red onion with pistachio nuts and oregano, all served up on a tomato base with a restrained amount of mozzarella melted into it. The spelt flour base was crispy and light, a particularly impressive effort for premade pizzas heated up under a grill, but the toppings were where things really shined. The vegies were roasted to perfection, the cheese and herbs were tasty and the pistachios were crunchy little treats hidden under everything else. Wonderful.

At this point I relaxed a little, my stomach was no longer gnawing angrily at its own lining and I could soak up the atmosphere without being driven insane by all the tempting food smells (although high appetite-suppressant points must go to the chorizo stand, wafting burning meat smells across the whole event). We eventually strolled beyond the food festival zone and stumbled onto some bits and pieces somehow related to the swimming championships on in Melbourne this week. The food stalls looked much less interesting, but the toadstools dotting the hillside were kind of fun. 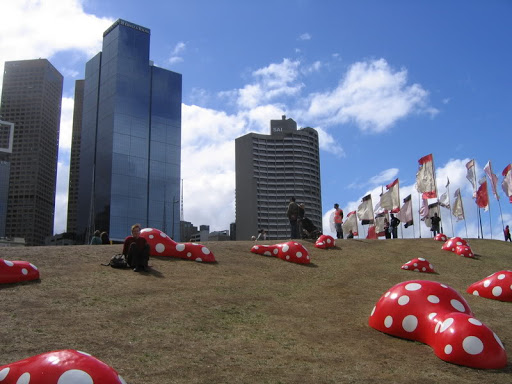 Fighting our way back into the fray, we found ourselves at the Spice Bazaar stall, which combined an impressive range of packaged spice blends for sale with some mezze plates to satisfy more immediate desires. I browsed through the spice range (if browsed is really the word to use when you're scrabbling through a small spice stand with a dozen other people all angling to get to the free tasting plates) and settled on a selection of four blends (Ras el Hanout, Achiote Powder, Tandoori and Spanish Creolo Adobo, $12) to take home and experiment with.

With the warm aroma of spices bringing back our appetites, we settled in with a mezze tasting plate. For just $5, the mezze plate was loaded up with a pile of Turkish bread, hummus, harissa yoghurt a pumpkin tagine and some smoked vegetables, sprinkled with sesame seeds and sumac. The hummus and the pumpkin were particular highlights, but the whole plate was quite impressive. 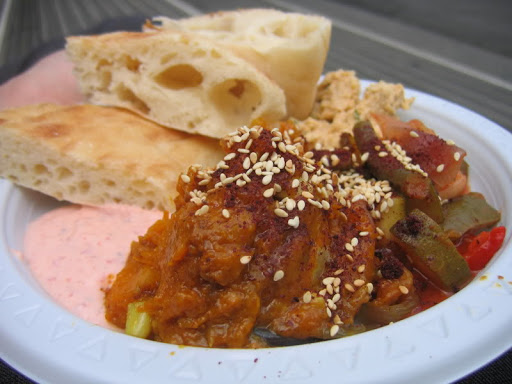 By now I was fully sated - stuffed to the gills with pizza, rice and mezze - and starting to find the crowds a bit frustrating. But the afternoon wasn't over yet - 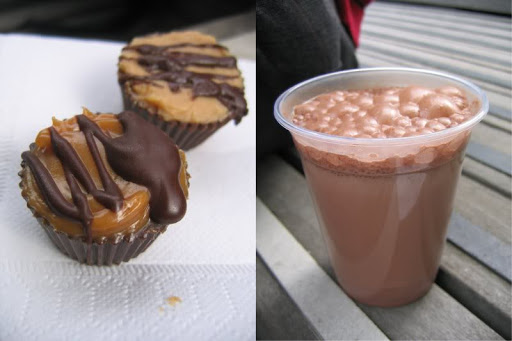 Cindy had spotted the San Churro stall and, despite the promise of a whole day of chocolate-themed treats on Sunday, wanted to cap things off with some dessert. The hot chocolate was unfortunately still lukewarm when we turned up, so Cindy opted for a cold chocolate ($5) and a couple of little chocolate cups (one peanut butter and one caramel - $1.50 each). I had a taste of the drink, but it was too rich and thick for my tastes - more chocolate than milk I'd wager. But Cindy seemed to enjoy both it and the little sweets.

With both of us completely satisfied, we wandered up through the atrium (stumbling on a micro-brewery event, complete with beer-tasting - if only I'd saved some room!) and jumped on a tram back home to flop on the couch and recover.
Posted by Michael at 5:27 pm