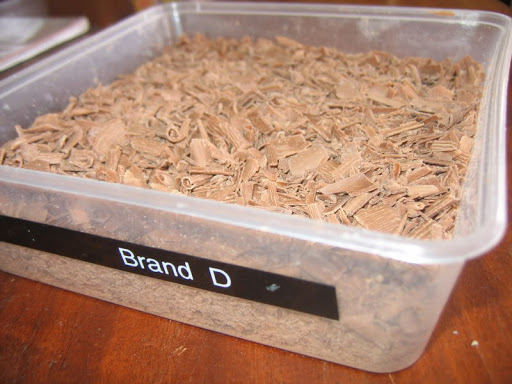 The lab where I work turns up a number of fun, edible surprises. There's a cake from Browns bakery for every birthday and an annual cooking competition, for example. There are donations of fresh produce from people's gardens, and spontaneous packets of Wagon Wheels to share on slow afternoons. Then last week, when we had assembled for our six-monthly workplace health and safety meeting, our lab leader Mark produced five plastic containers, each filled with grated milk chocolate. Teaspoons were passed around. We would be having a chocolate tasting.
The test had two parts. First we were to taste each blind-brand of chocolate, A to E, and rank them in order of preference. Next we were given a list of chocolate brands - Haigh's, Lindt, Dove, Cadbury and Home Brand - and instructed to write our order of preference of these chocolates next to our first list. How would our perceptions of brands, expense and quality measure up to our actual enjoyment of the actual chocolate? It turns out that for women, the two lists were quite highly correlated (0.6) and for men the lists were only weakly correlated (0.1). However the one person that had the same ranking on both lists was male! Everyone (with the exception of one person) ranked the home brand last for taste, and there was no strong pattern among the other preferences. Rather than testing one box of each brand, there were in fact two boxes of Dove chocolate and no Haigh's at all. Although no-one noticed the double-up, most people ranked the two Dove samples next to each other. 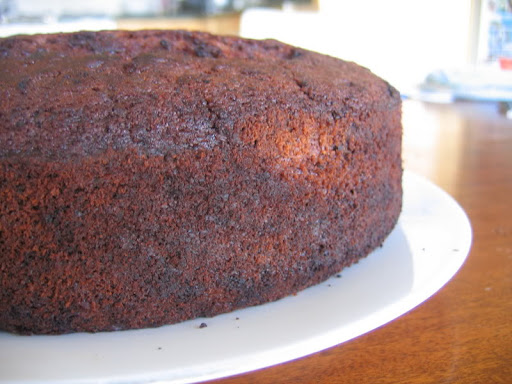 In spite of my lab's appetite for afternoon sweets, there was a lot of chocolate left over and Mark had no intention of taking it home. As he offered the boxes around, I hestitated a little too long before refusing, and ended up with about 400g of Brand D. As the week wore on, Brand D sat in my small pantry, diminishing by a tablespoon or two a day. The thought nagged at me that I hate grating chocolate and that to make the most of this bounty, I should pull out a recipe that required it. It was this chocolate cake recipe that I settled on, largely because it would present a new taste test to my lab! The recipe is devoid of milk and instead includes two glasses of red wine. It gives the cake a distinctive, deep flavour that you couldn't get with the prescribed dosage of chocolate alone. Baked correctly, it's also very moist. My plan was to bring my Brand D chocolate cake to the lab for afternoon tea on Monday and offer a small prize for the first person to correctly guess the mystery ingredient. 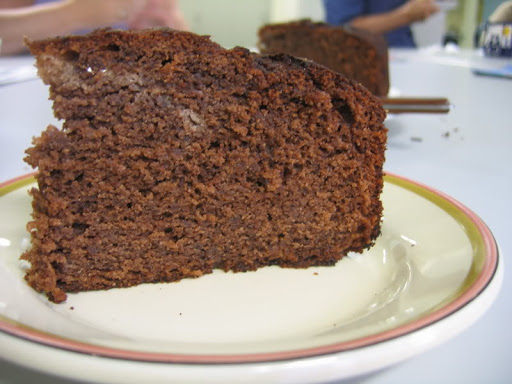 This is not my most successful rendition of this recipe. I didn't pay quite enough heed to my oven thermometer, the cake baked at a higher temperature than it should, and consequently the outside was a little burnt by the time it took the centre to cook. But a gentle scrape with a serated knife removed the blackest of the crumbs and the cake was an acceptable and homely gift to my co-workers. I was bombarded with alcohol-based ingredient guesses, most of them far more exotic than the cheapo half-bottle within. It eventually took a share-housing student like Mich to win the prize, a small box of Irish Cream-centred chocolates.

Preheat the oven to 170 deg C. Cream the butter and sugar. Add the eggs and wine. Weird colour, huh? Next sift in the flour, baking powder and cinnamon and combine well. Finally, stir in the cocoa and chocolate (my cocoa needed a good sifting). Now it's a more appropriate shade of brown, I hope! Pour the batter into a greased cake tin and bake for about an hour. 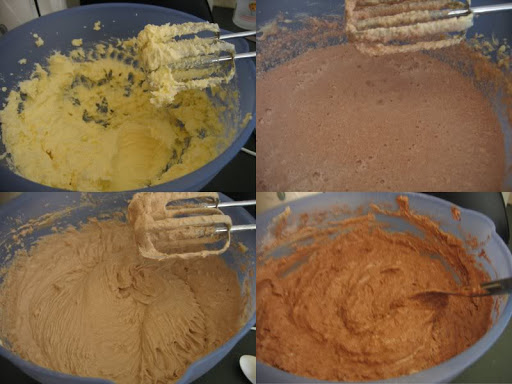