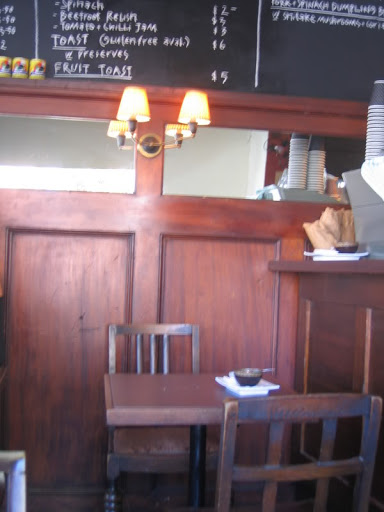 Saturday found us in Fitzroy for a visit to Casa Iberica and thoughts quickly turned to some sort of lunch while we were out and about. Our first attempt was Babka, but the queue was almost out the door, so we decided to escape the crowds of Brunswick Street to the quieter backstreets and Ici. Unfortunately, Ici's reputation ensures that even tucked away on Napier Street, there's seldom a spare table to be had. Despite being told we were next in line for a table, we ended up waiting for twenty minutes or so to be seated. I'm not entirely sure if this was just down to people lingering over their coffees or if the staff forgot about us a few times, but with the cold wind picking up we took matters into our own hands and pounced when we saw a vacancy near the door.

The last time we'd visited Ici I'd had an immensely satisfying breakfast, and I was interested to see if their lunch menu measured up. It turns out that they really are a breakfast focussed establishment. The brekkie options take up at least three-quarters of the blackboard menu. Still, there was a small range of foccacias, a salad or two and some soups to choose from, so there was enough to work with. Cindy agonised for about ten minutes before resisting the temptation of the French toast and ordering the noodle salad. Alas, they'd just run out of noodles, so she could order the French toast free of guilt. It came piled high with figs, blackberries and slathered with cured orange mascarpone and looked almost too delicious to be true. Cindy tells me that, despite the mascarpone lacking much of an orange flavour, the whole concoction was divine. It certainly showed, with her lunch disappearing faster than mine, a very rare event. 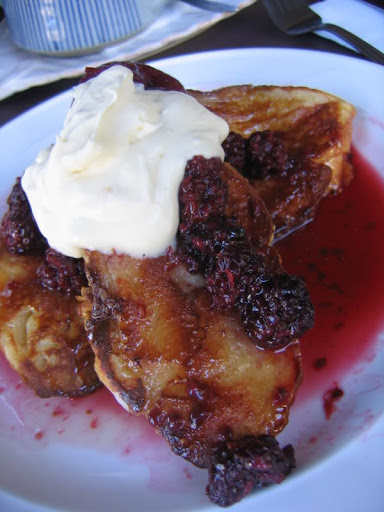 I had ordered the vegetable dumpling broth with shiitake mushrooms and coriander and my awkwardness with chopsticks combined with the slipperiness of the dumplings had slowed me down somewhat. The broth was strong and peppery, and filled liberally with green vegetables (broccoli, coriander, bean sprouts) and a handful of tasty mushroom dumplings. It suited my mood, without being a particularly memorable meal. In future, Ici will strictly be a place to visit for breakfast - especially on days when we're not in a rush to eat. 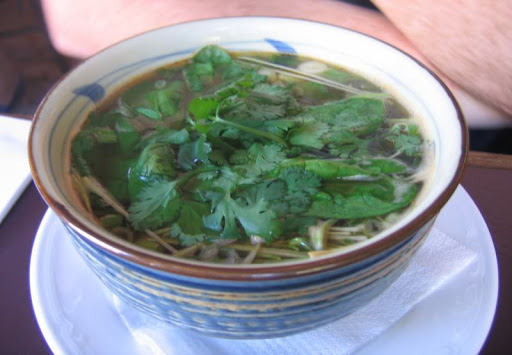 You can read about our previous visit to Ici here.
Posted by Michael at 10:17 pm