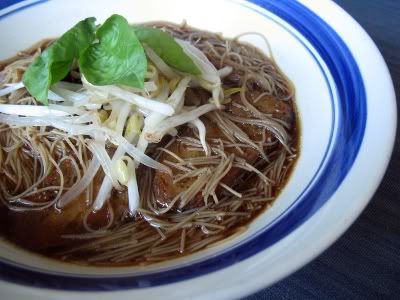 Well, I didn't go through all that seitan kneading with no idea of what I'd make with it! I had my eye on the slow pho, another recipe from Fresh from the Vegetarian Slow Cooker. It has its own stock that takes a solid 6 hours to infuse - star anise and cinnamon ensure it's an aromatic brew, but I couldn't actually detect any heat from the chilli or ginger. It soaked into the seitan strips just as I'd anticipated but all up it wasn't quite as vibrant as I'd hoped.

Even so, this bowl o' broth had something to teach me - the comfort of noodle soups. Any number of food bloggers have described their nourishing, consoling and healing properties but I've always preferred the heavier European potatoes and pastry for this role. Now I think I get it. I'm not sure whether I'll come back to this recipe again, but my one experience with it has me keen to explore this corner of cuisine further.

Place the onion, chilli, ginger, anise, cinnamon, soy sauce and stock in a slow cooker; cook them on Low for 6 hours.

Place the rice vermicelli in a bowl and cover them with water, allowing them to soak for 15 minutes to soften. Fry the seitan strips in the peanut oil until they're lightly browned on both sides. In a small bowl, dissolve the miso paste in a small amount of boiling water. Whisk in the oyster sauce and lime juice.

When the slow cooked stock is ready, strain the liquid and return it to the slow cooker. Strain the vermicelli and stir them into the stock. Mix in the seitan and the miso mixture. Cook the pho for a further 10 minutes, before ladling it into bowls and topping with your chosen garnish.
Posted by Cindy at 12:11 pm