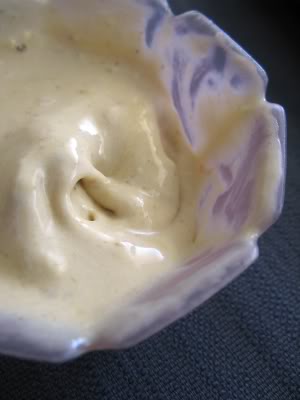 Regular readers know the backstory here by now - Michael's banana hatred knows no bounds, but we're receiving these fruits in our regular fruit & veg deliveries and I'm trying to get through them on my own. A few I eat as is, but I've also been making banana bread, shakes and cookies. Once ripe, bananas store well (peeled!) in the freezer - this makes them an excellent chilly replacement for icecream in smoothies and shakes, and when thawed they're even easier than usual to mash for baking.

ABB and Ruth alerted me to the fact that banana can substitute even more directly for icecream - frozen ones just need a spin in a food processor and apparently they transform into a soft-serve style delight. (Thinking back, this is probably what we ate for dessert at Continental House last year.) This month I saw the technique popping up on stonesoup, Vegan Family Vs Omni World and Cook (almost) Anything at Least Once. While I liked the idea of Haalo's rum'n'raisin flavouring, it was Jules' use of malted milk powder that I had to try.

My first shot didn't work out so well - I thought I'd just use my stick blender on a small banana as a single-serve taster and it was difficult to whip the banana to complete smoothness and thoroughly mix in the accompanying ingredients. With my next two bananas I played properly, using our food processor, and all fell into place. The bananas smoothed out and fluffed up - the texture really was impressive! Very much like a soft-serve icecream when served straight up. I also put some back in the freezer for later - though the colour browned a little, I was impressed all over again at how scoopable it remained days later.

The flavour, naturally, is banana all the way - you won't fool the haters with this one. I didn't think my malted milk powder quite stood up to it. But others have recommended adding other fruits, nut butter or cocoa and I'll be giving these variations a go. I've got nothing to lose, except for my currently expanding frozen banana collection!
Posted by Cindy at 2:31 pm