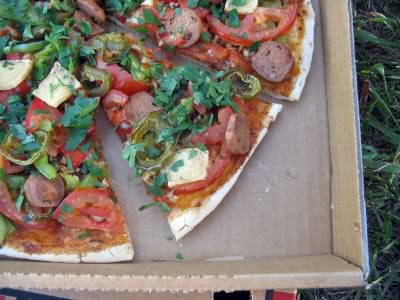 It's been remiss of us to only make it to Hawthorn's Plush Pizza now for the first time. Actually, it's been remiss of Melbourne's entire veg*n blogosphere not to blog it more often - I've only been able to find two reviews, both of them from 2007. Plush has a lot going for it - the menu boasts 19 vegetarian pizza topping combinations, they're willing to veganise just about all of them and they offer gluten-free bases (although I hear that these aren't great). They're right on the #75 tram line and while they've a few seats for eating in, St James Park is a short stroll down the street with a gourmet beer purveyor on the way (just take a bottle opener if you want much choice).
And for all that, they turn out some damn fine pizzas (thank goodness!). Michael couldn't resist the Hothead (pictured above, $15.80), and had the veganised version with tomato sauce, 'mozzarella', tomato, capsicum, vegetarian sausage, fried tofu, jalapenos, tobasco sauce, parsley and spices. This was sufficiently spicy that Michael advised me not to try it. Alternatively, it may have been so delicious that he didn't want to share it. I did, at least, get to try a chunk of the vegan cheese. It was pleasant, if bland - if I were going vegan I'd probably request no cheese rather than paying out extra for the fake stuff. I ordered the Barbecue pizza ($15), layered up with tomato sauce, mozzarella, baby spinach, red onion, vegetarian sausage, roast potato, barbecue sauce and shaved parmesan. It was THE BUSINESS. The barbecue sauce was super-smoky, the roast potato chunks were gorgeously tender and caramelised and the spinach and light hand with the cheese kept it tasting reasonably fresh. The only downer here is that the barbecue sauce contains honey, so isn't vegan-friendly.
Most of the menu items feature a similarly high number of toppings but they look thoughtfully composed - I'm looking forward to trying the Aztec, Potato Swoon, Satay Sublime and Tom Yum pizzas, as well as testing Plush on the sparser classics like garlic, margherita and pesto. And if Plush's ideas don't appeal, they also offer extra toppings of your choice for a price - you could probably build up almost anything you wanted from their margherita.
The bases were good stuff, too - quite thin and crisp, but with enough substance to support the toppings. They're not up to the high standard of, say, I Carusi, but they certainly edge out the typcial takeaway competition, such as Crust. If only they did home delivery!
Edit 10/07/11: Sadly, Plush Pizza has closed - Melbourne veg community will miss it terribly.