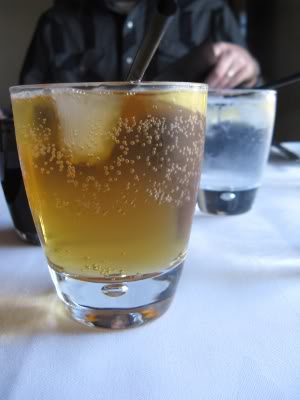 Michael mentioned that Port Fairy seems to have a high density of Good Food Guide-hatted restaurants for a country town and after having such a lovely experience at Beechworth's Provenance, we made sure to set aside some time and money to give one of them a go. Merrijig Inn took our fancy, based on an informative website that mentioned a dedicated vegetarian menu. We fancied them even more when, on our arrival, our waiter listed gin and tonics and Pimms with lemonade amongst the drinks we might start with. They also offered rainwater as well as the bottled stuff - much more pleasant than the soapy-tasting tap water in town. 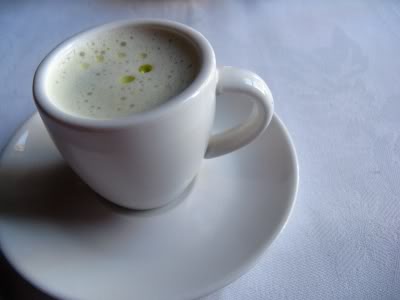 Though there were a la carte options, we were sold on the vegetarian tasting menu - 6 courses for $75 - as soon as we saw it. It began with an amuse bouche of asparagus and truffle oil soup, as well as the requisite classy bread and butter. The soup was a thin non-creamy broth with very pure flavours - I couldn't taste anything but fresh asparagus, aside from the silky truffle oil resting on top. Very spring-like! 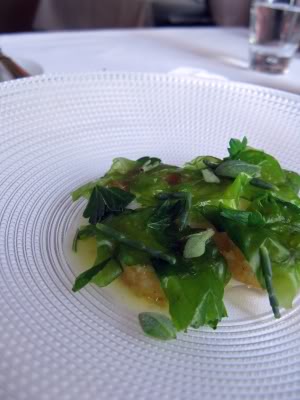 The first official course was called "Surf'n'Turf". I loved that they'd reappropriated this meaty meal name for a vegetarian plate, and was impressed all over again by the dish itself. The 'turf' is smoked, fried potatoes - like hash browns from heaven - cloaked in a thick sauce that I think included more potato and truffle oil. On top is a 'surf' of sea vegetables - samphire, sea parsley and sea lettuce. I have a tenuous relationship with seaweed (e.g. my sushi fondness vs the wakame dish at Provenance) but this hit just the right note for me - subtle saltiness, some crunch from the samphire and a gentle herbiness. No rubbery textures at all! 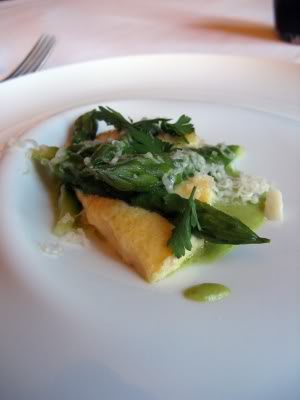 Surf'n'turf was followed by 'asparagus, Shaw River cheese, parsley'. The parsley, as well as making a pretty garnish on top, also made up the puree base. The cheese formed a thick custard, like a luxuriant savoury scrambled egg, and there was also a little more grated over the top. Thankfully, amidst it all, the asparagus spears were cooked lightly and simply. These flavours always meld well, and there were enough contrasts in texture to keep it interesting. 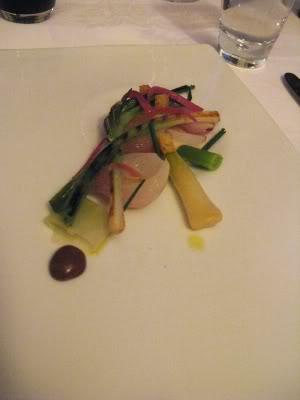 This is '"The Onion Family", smoked potato, roast garlic'. Most prominent are the four or five onion varieties, all cooked to tenderness - some still retaining firmness and a little astringency, others meltingly soft and sweet, one even pickled, I think. Underneath, standard and black garlic cloves were presented as purees. On top, tiny crunchy croutons. I don't remember there being more smoked potatoes, actually (and based on how much I loved them the first time, I think I'd remember them!). I love me some soft, caramelised onions and this dish brought some nice variety to that theme. 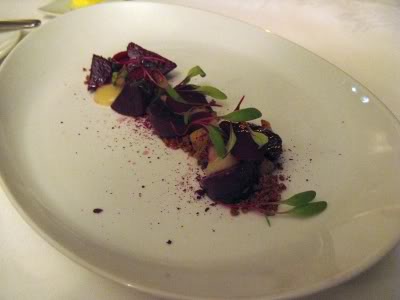 "Beetroot, apple, croutons, chard" was probably Michael's favourite amongst some terrific dishes. The beetroot arrived raw, cooked, as a 'soil' with pine nuts and as a dehydrated powder. The chard appeared as dainty sprigs, nothing like the boisterous bunches we've been eating at home! But it was the apple, some roasted some pureed, that had Michael moaning with appreciation. I think of beetroot as more of a winter vegetable, but some light touches ensured this wasn't too heavy on a warm night. 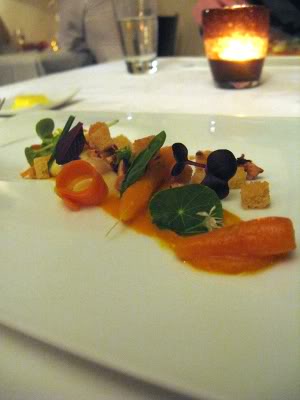 To close the savoury part of the meal, we were given 'carrot, hazelnut, brie, flowers and herbs'. It was so pretty and cheerful looking, but beneath that festive veneer lay an overpoweringly rich cheese. Nothing could stand up to it! I wished for a glass of matched sweet-and-sour wine that might cut through the cloying brie. 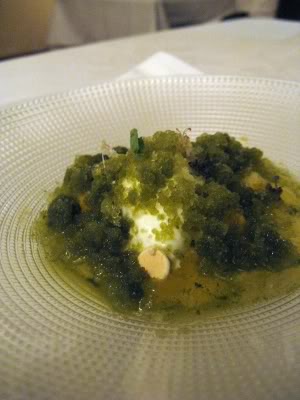 Dessert was 'orange, sheep's milk, basil'. The sheep's milk had been churned into a thick icecream, surrounded by orange segments, orange jelly, dehydrated orange meringue drops and grated orange cake, then covered in a green snow of basil granita. It was very refreshing, just barely sweet, and an ideal palate cleanser - Michael loved it, though I found the basil a bit overwhelming. 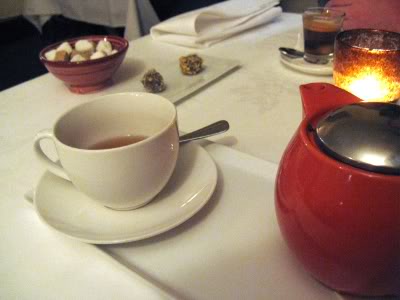 We finished up late with coffee, tea, and little hazelnut chocolates. It was a fine, even exciting, meal. Though it was a little short on protein, I didn't feel a lack of anything as I ate - the onions, beetroot and cheese were all substantial and there was overall a feeling that this chef loves playing with vegetables. I liked that most of the dishes had relatively simple flavour themes, with variety coming from the preparation methods and resulting textures. As a dedicated sweet tooth the dessert didn't quite meet my expectations, but it upheld that same standard of fresh flavours and contrasting textures.

Glancing a neighbouring table and looking now at the menu online, I can see that the vegetarian menu has been created almost independently of the standard tasting menu - only the beetroot dish looks like it might be a 'same, but without the meat' imitation. Even better - it's $30 cheaper per person than the omni version! The only drawback is that we weren't offered a set of matching wines (these are available with the standard tasting menu).

I don't know if or when we'll find ourselves eating extravagantly at Port Fairy again, but if we did I'd find it hard to choose one of the other hatted restaurants over a repeat visit to the Merrijig Inn.