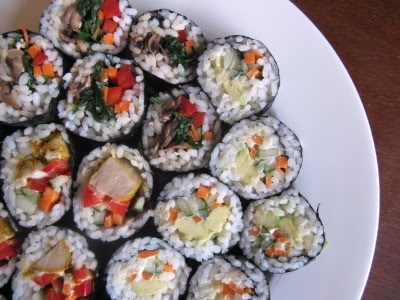 With the weather hotting up again and a handful of friends joining us for dinner, it seemed like it was time to bring out the Veganomicon sushi recipe again. We varied our toppings a little this time, in the process un-veganising things with the addition of Kewpie mayonnaise, which accompanied our standard spicy tofu, adding a slight twist on the always delicious recipe. 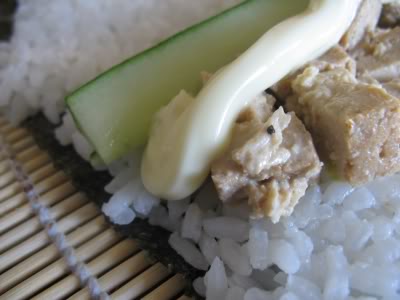 Cindy decided that Pandan 'chicken' would be a reasonable substitute for the KFC-style sushi rolls that used to be her favourite carriage on the sushi-train, so we baked up a batch and sliced them into sushi-size chunks. They were chunky, meaty and spicy - and no doubt far from authentic. Tasty though, very tasty. 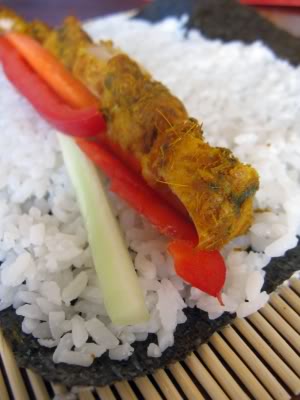 Finally, something veg-tastic: marinated mushies, courtesy of Big Oven. This is super-simple: just chop up some mushrooms and soak them in a mix of rice vinegar, sake (we used dry sherry instead), a couple of shallots, some sugar, soy sauce and a dash of salt. Leave to soak for a few hours, stirring occasionally and you've got yourself a delicious Japanese-style mushroom mix. Combined with some sesame steamed spinach and some slices of avocado, this was an innovation that we'll no doubt return to. 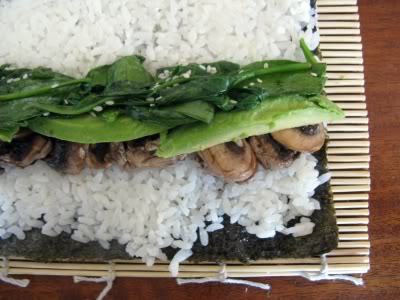 Sushi has yet to let us down and, judging by the number of sushi rolls slammed down by our small group, it's a recipe that everyone enjoys. I thought we'd be eating sushi all week, but these were so successful that the leftovers were pretty limited. Ah well, we'll just have to make some more.
Posted by Michael at 1:00 pm