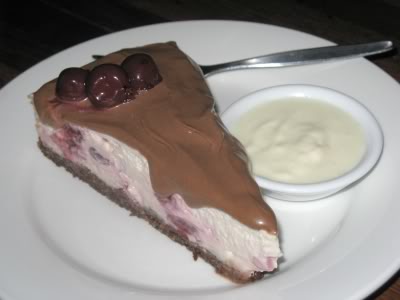 I suppose I could pass off these photos as dessert following the EBC Philly Cheese Steak in my last post. I had no chance of fitting such a thing in on that night; actually we revisited this vegan-friendly pub a mere five days later, but with good reason! This time Michael and I were accompanying a larger crowd, all of us wanting to squeeze in some time with Liz before she moves further south to the Apple Isle.


Tuesday at the EBC is $12 parma night, and Michael and I didn't deliberate long before agreeing that we'd both order the discount option. The size of the cheap parmas is also discounted on the $18 variety but we didn't mind a bit - there's still plenty of food on the plate and, I couldn't help noticing, just that little more room for dessert (or beer, I guess, if that's your preference). 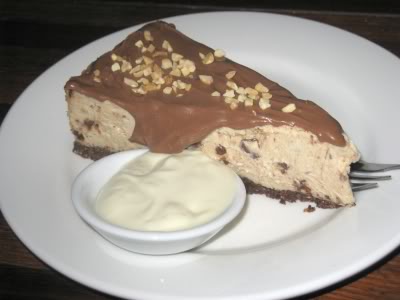 With Kristy at the table, I wasn't the only one preferring dessert over beer. The night's sweet options were 'peanut butter chzcake' and 'cherry vanilla' (both vegan, both $8) and we happily ordered one of each to split. We were even happier to discover that the 'cherry vanilla' dessert wasn't just fruit doused it vanilla essence, as we'd joked, but another dairy-free cheesecake-style slice.


These chzcakes do a stellar impression of the real thing, perfectly smooth and creamy without any untoward soy flavour. The cherry one was a little bland (especially considering how much it impressed us a year ago) but Kristy and I, united in our love of chocolate-peanut butter desserts, had no such complaint about the peanut butter chzcake. It's a super-rich slab of salty-sweet heaven, best shared with a fellow connoisseur.


Managing to sample the full dessert menu had me feeling pretty smart, and I soon discovered the table's collective cleverness extended to pub trivia too! Our impromptu EBC Tuesday Trivia team earned a repectable 2nd place and a cheeky bottle o' red.
____________


You also can read about our previous visits to the EBC: one, two, three, four, five, six.
Posted by Cindy at 3:46 pm