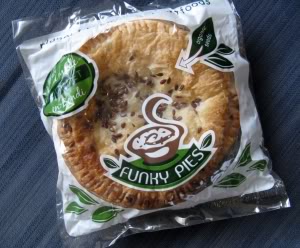 I've been hearing good things about Sydney's Funky Pies for some time, with murmering that they outshine other vegan pies on the market. For a month or two they were near-mythical objects, with Radical Grocery selling out of a batch in no time and our quest to get some from their World Vegan Day stall also coming up empty. I was beginning to wonder if we'd ever get to try them. And then bam: they're everywhere. The East Brunswick Club added to them to the menu, and Radical Grocery ordered in a massive batch. It was time to try them out.

Rather than forgo Philly cheese steaks or parmas, Cindy and I grabbed a handful from Anikee and took them home to prepare ourselves. We picked up two varieties: the Funky Chunky and the No Wurry Curry, kicking off our pie-tasting with the shitake-based chunky variety.

Awful name aside, this is one impressive pie. Large shitake chunks that have the texture of faux-meat (are they actually some sort of combo of soy protein and mushies? It's hard to imagine getting such meaty chunks just from mushrooms) and the gravy-tastic taste that you expect from a good pie. The pastry is top-notch as well, taking these pies straight to the top of my pie ranking table. 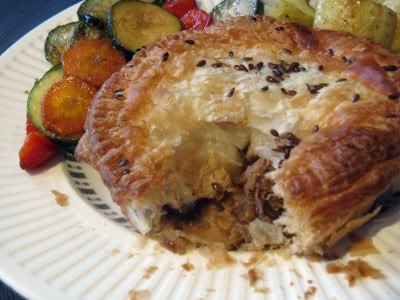 A week or so later and it was time to try our second batch - the No Wurry Curry pies. These are filled with a lentil, chickpea and coconut curry, which is nicely spiced but a tad on the dry side - the impressive pastry needs a more liquidy gravy inside to satisfy my pie cravings. 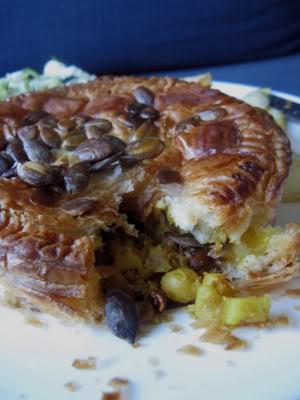 At $5.95 each to take home and bake, these aren't cheap pies (well above La Panella and Ykillamoocow), but the Funky Chunky pie is well worth the expense, with better pastry and a more delicious filling than any of the other options. The curry pie was a bit of a letdown in comparison, but I've heard good things about the Spicy Thai Pie so we won't settle on just the one variety just yet.

Radical Grocery is the best place to get them in Melbourne, although their stock tends to get bought up quite quickly. Funky Pies are also now available for $12 with chips and salad at the EBC, for those of you who'd rather someone else prepared your meat-pie fix for you.
Posted by Michael at 8:30 pm

Labels: Pies and other Pastries, Vegan or vegan-friendly