Cindy and I, like the majority of Australians, decided to turn the Australia Day holiday into a four-day long-weekend, and trekked off to Port Fairy to laze around. It's a nice little town - clearly well set up for foodie tourists, with possibly the highest density of Good Food Guide hats per capita of anywhere in Victoria. We didn't focus too heavily on the fine-dining (although there is another post coming about our one fancy meal for the weekend), instead surviving on a heady mix of local cafe food, trail mix and chips.

The weekend started off with a wander around the town - it's an interesting mix of historical buildings, trendiness and natural beauty. We focussed mainly on the natural beauty, heading through some nice little wetlands on the way to Griffiths Island. 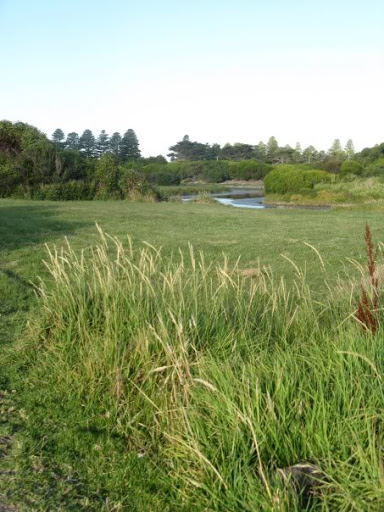 Swamp wallabies popped up anywhere undeveloped - they're very cute, and quite used to people. 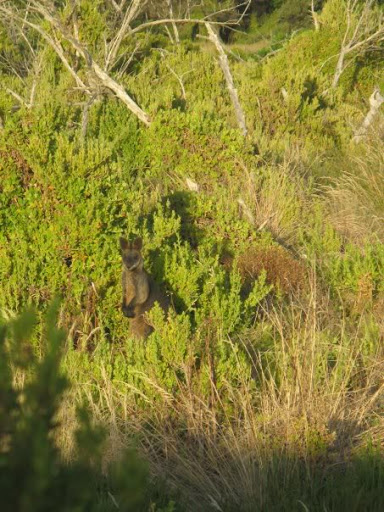 Griffiths Island nestles up against the south-east edge of Port Fairy and is connected by a short causeway. It's an old whaling station, although it has more or less turned wild again, with just the lighthouse still standing. 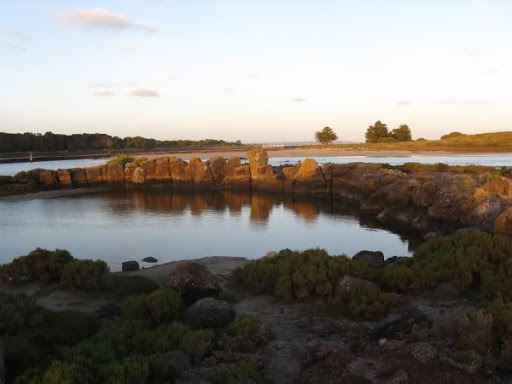 The main attraction of the island (for me at least) is the shearwater colony. Tens of thousands of short-tailed shearwaters use Griffiths Island to nest, with the whole island riddled with their burrows. These little birds head off to the Aleutian Islands near Russia in March each year and fly back across the world to breed in Australia around September. By January, the chicks have hatched and the adult birds spend all day out at sea feeding. Right on dusk they come flooding silently back to their burrows, the sky filling up with dark, swooping shapes in minutes. It's pretty spectacular.

Of course by the time the show was over, it was getting towards 10pm and Port Fairy had shut up shop - luckily we'd pre-packed some leftover haloumi and grape salad, which got us through until morning.

On Sunday, I somehow convinced Cindy that hiring bikes and riding for thirty-odd kilometres was an awesome idea. So, after a fairly forgettable breakfast we set off for Koroit on two of the hardest bike-seats ever built. They were basically just hard-plastic. Throw in a pedal that fell off within the first kilometre, and things weren't looking good. Luckily, the rail-trail between Port Fairy and Warnambool is a pretty easy ride - it's flat, relatively smooth and keeps you away from terrifying highway traffic. 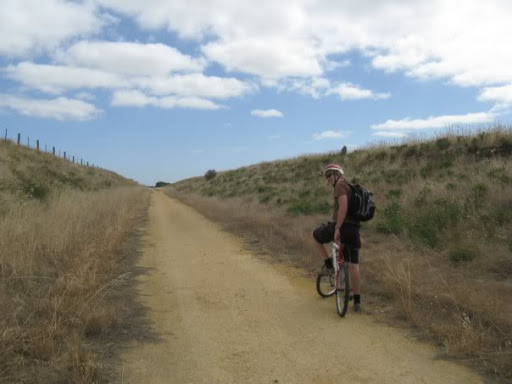 The scenery is mostly farmland, but it's an interesting enough ride - you cut through a few bits of native bushland and there are the requisite farm animals along the away to keep things interesting. 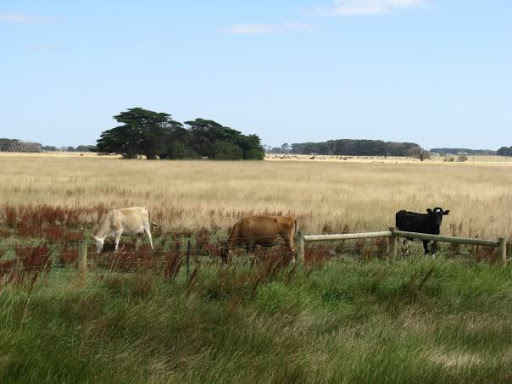 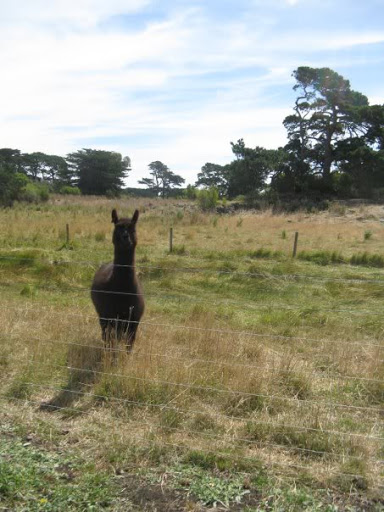 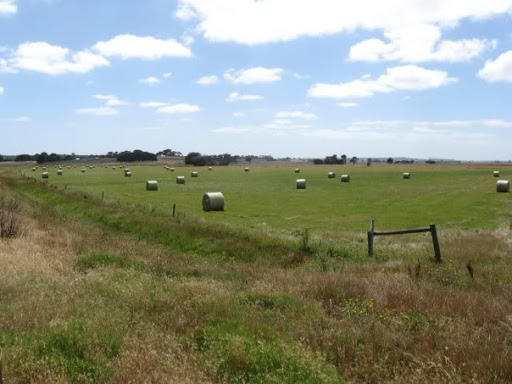 Bike seats aside, there was only one problem with the ride - flies. As soon as the wind died down or you slowed down slightly to negotiate a yet to be completed bridge, the flies swarmed all over you. I stopped to read the map at one stage and could barely see it through the cloud of flies on my face. Not nice. 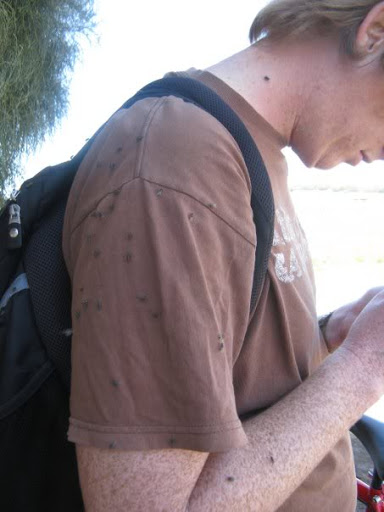 Still, with a last push up the first tiny incline of the ride, we found ourselves rolling into Koroit, our intended destination. First stop: chips. 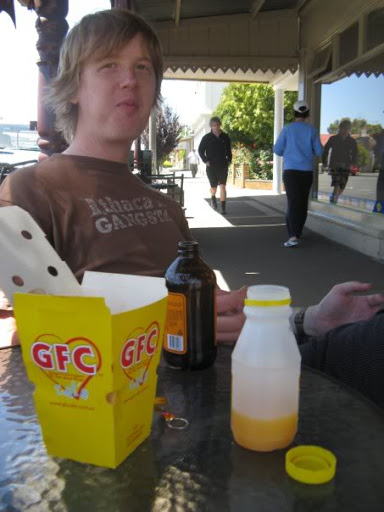 The original plan had been to ride from Koroit another five kilometres or so down into Tower Hill Reserve, the crater of a volcano that erupted 7000 years ago and is now rich with native wildlife. But by the time we got to Koroit we were a bit sunburnt, had throbbing bums and were already feeling the ride back in our legs. So we just wandered down to the rim of the crater and looked across it. It's pretty impressive - I'm excited about going there properly one day. 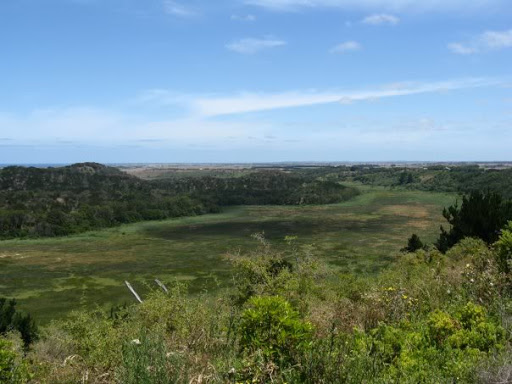 The ride back to Port Fairly felt easier than the ride out but we were still pretty spent by the time we got back to the hotel, and the afternoon was spent mooching around reading and dozing. We decided to reward our endeavours with dinner that was a step up from the local pizza place, so we wandered into Saltra Brasserie to sample their grazing menu. They weren't laden with veg-options, but we managed to come up with: the warm artichoke dip with goat's cheese and ciabata ($11): 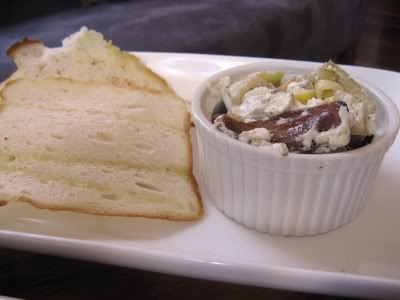 The grilled and battered saganaki with lemon ($8): 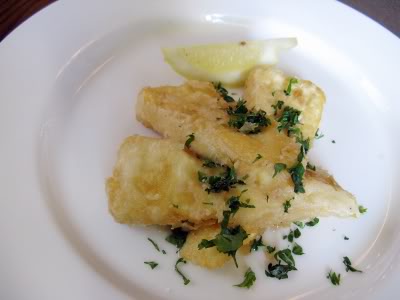 And the pizza with Shaw River buffalo mozzarella and tomato: 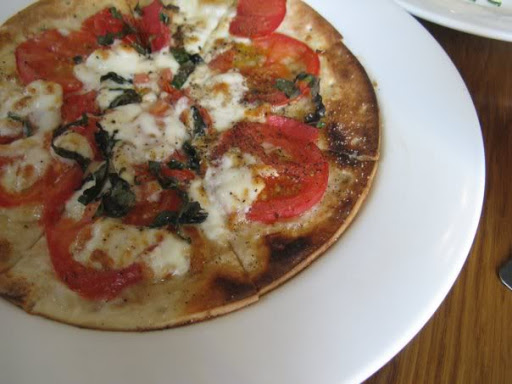 Throw in a couple of local beers, and this was a very satisfying post-ride dinner. None of it was outstanding but everything was well cooked and tasted great, which is all you can ask for really. We capped things off with an icecream from Rebecca's, the one icecream place open after 8pm. 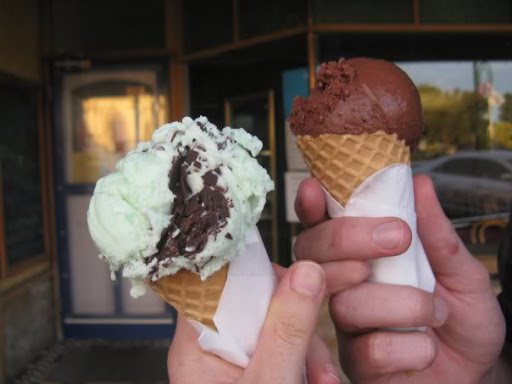 After an early night, we woke up on Monday realising that we were both actually very sunburnt, so our original beach-based plans were swapped for a day of lazing about indoors. A disappointing wander through the op-shops and quick stroll to the wharf for more hot chips were our only outings as we hung out inside generating our own heat, doing crosswords and getting helplessly drawn into The Girl with the Dragon Tattoo.

All we had the energy left for was a dinner outing, which will be the subject of its own post shortly. Our Port Fairy jaunt was a pretty ideal long weekend - a bit of physical activity, lots of reading, too much sun, some good food and a little bit of nature.
Posted by Michael at 10:54 am