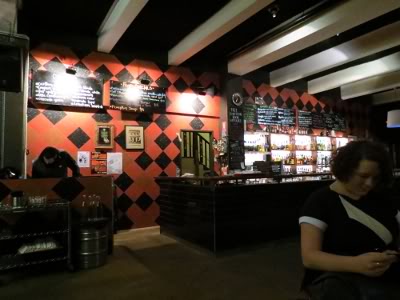 The vegan telegraph was abuzz this week with the news that the chef from the sadly departed East Brunswick Club had started a similar vegan-friendly menu going at The Cornish Arms on Sydney Road. We were quickly on the case and, with Danni, Keira and assorted others in tow, were there on Thursday night to check it out.

It's a nice enough pub - there's an enormous bar, loads of tables and a pleasant-looking, if spartan, courtyard. The crowd was a mix of hungry vegans, Brunswick hipsters and locals who may well have been hanging out at The Cornish Arms since before the cool kids moved north from Fitzroy. The menu is very reminiscent of the EBC - there's a parma, some burgers, nachos... in general lots of mock-meat and junky pub food (there are rumours of pizzas, but we didn't spot any vegan-friendly ones on the blackboard just yet). Our kind of thing.

Cindy tried out their fish 'n' chips ($20), which had a very familiar look about them. The 'fish' chunks are battered tofu, with the nori adding a bit of a fishy flavour and the vegan tartare providing the real highlight. The chips were okay as well. Not great, not terrible - just old-fashioned fried goodness. 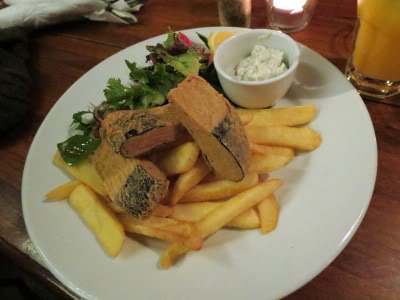 I had the burrito ($18, which was at least a bit different from the EBC's mexi-night version). 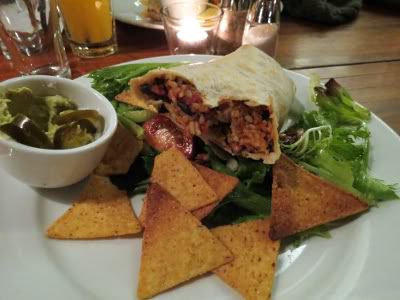 This came stuffed with rice, black bean chilli, mock chicken, mock bacon and vegan cheese, with a side of scattered corn chips, a slightly odd jalapeno/guacamole/sour cream sauce bowl and some salad. It was pretty satisfying - these are good-sized burritos - but at $18 it doesn't really measure up to the excellence of the $10 tofu burrito at Trippytaco (but then what does?).

We decided to go the whole hog and try out the vegan dessert - just like the EBC their main offering is vegan cheesecake. On our visit it was peanut butter and chocolate flavoured ($6). And, just like the EBC, it took about an hour to turn up. 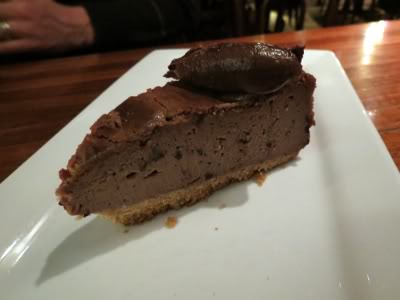 And, like the savoury food that had gone before it, it was... fine. A vegan cheesecake is a pretty reliable dessert option and these flavours hit the spot nicely. It might have just been my frustration at the wait (they'd forgotten our order!) but I just wasn't super impressed by it. Good, but not great.

Don't get me wrong, the CA is a nice pub - they've got good beers on tap, plenty of space and a nice, relaxed vibe. But the food is expensive (vegan mains are $16-$20) and pubs like The Gasometer and The Fox have really kicked the vegan-friendly pub food up a notch since the heyday of the EBC. Still, if you're after something junky and animal-product-free and want somewhere you won't need to book or worry too much about how stylish your facial hair is looking, then it's well worth checking out the Cornish Arms. Let us know what you think.
____________

Nobody seems to have blogged the new menu at the Cornish Arms yet, but Beer Bar Band and juganaut both liked the old menu well enough.
____________

Accessibility: There's a flat entryway and a pretty spacious interior. Lighting is low without being ludicrously dim. Ordering and payment happens at the bar. The toilets are on the same level and are wheelchair accessible.
Posted by Michael at 7:54 pm