When I submitted my PhD a couple of months back, Cindy and I had a slightly disappointing celebratory lunch at Seamstress. So when I got my marks back this week (minor changes!), Cindy made sure that our celebrations would really hit the mark. Spotting some last minute Attica cancellations on Twitter, she pounced and booked us in for a Friday night degustation spectacular. In case you can't be bothered reading the long post ahead, just know this: this was probably the best meal we've ever had!  Book a table at once.

Attica is degustation only on Friday and Saturday night and have an 8-course vego menu as a standard option (the word on the street is that they'll do a vegan version if they're given a heads up). The fit-out is simple, stylish and pretty small - given its status as Melbourne's best restaurant (winner of The Age Good Food Guide gong, plus ranked the 63rd best restaurant globally), it's a bit of a surprise that the Attica crew haven't expanded to cater to demand. But I'm glad they haven't - the space is pleasant and not too crowded and the service is slick and efficient. Things get started with some freshly baked sourdough rye infused with wattleseed and served with the most ridiculously delicious emulsified olive oil and black salt spread (see above). I embarrassed myself slathering this stuff onto my bread to the point that Cindy tried to get photographic evidence of my greediness - luckily I was eating it too fast for our camera to catch me. 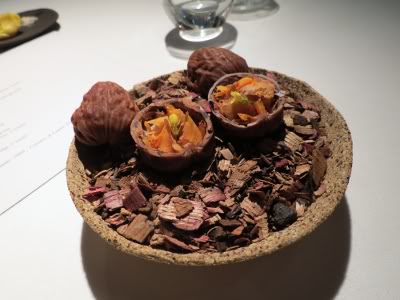 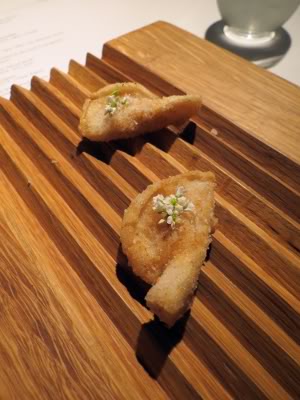 After biting into one of these, I was ready to call a halt to proceedings and just ask for a giant bucket full of them. Perfectly fried with a light and crispy crumbing around a squidgily delicious oyster mushroom - these were even better than the fried seafood snacks they brought to mind.

I don't really understand why there were three whole dishes before the menu proper began, but I wasn't going to send anything back - our final pre-meal treat was a fairly simple shiitake broth scattered with unidentifiable leaves (our note-taking gets increasingly unreliable as the matching wines start to pile up!). 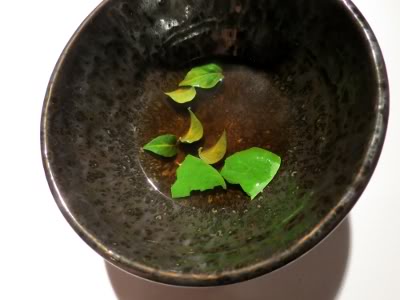 The broth was basically the distilled flavour of shiitakes - I enjoyed it, but it was probably the only thing brought to the table that didn't blow my mind. Simple and effective, but the least memorable dish of the night.

Right: onto the listed dishes. First up was the textured cauliflower with horseradish. 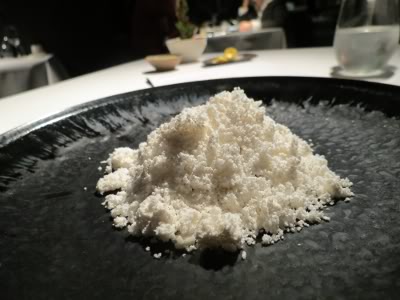 This is the vego version of a snow crab dish that's become a bit of an Attica signature. It's meant to look like Mount Taranaki in New Zealand (Ben Shewry is clearly proud of his NZ heritage, this isn't the only dish explicitly inspired by it). Little pieces of cooked cauliflower are teamed up with puffed rice, verjuice granita, witlof, freeze-dried coconut and barberries and dusted in a white horseradish powder. The dish is a wacky combination of flavours, textures and temperatures (there's a little verjuice iciness hidden inside the mountain!). 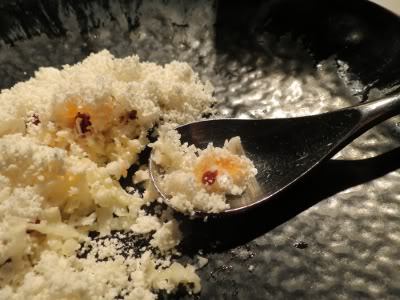 It's smart and fun, and works pretty well - Cindy's was a bit heavy on the horseradish, but mine was well balanced. The horseradish powder is a bit on the dry side, but if you make sure to combine it with the rest of the dish you'll have no problems. It all probably teeters on the edge of being too clever for its own good, but I was won over by it.

Next up: leek, lovage and mustard oil. 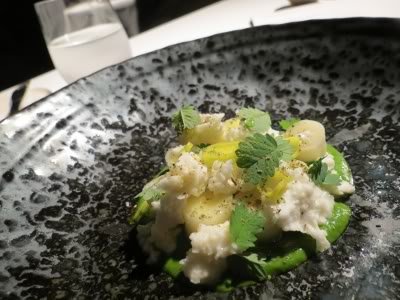 The leek was beautifully cooked - tender while maintaining a bit of texture - and the surrounding bits and pieces were wonderful. In particular, the buffalo mozarella was easily the best I've ever tasted, its saltiness was offset nicely by the slightly tart lovage paste and the sweetness of the leeks. Stunning.

After a couple of light dishes, things got a bit more serious with our next course: "a simple dish of potato cooked in the earth it was grown". 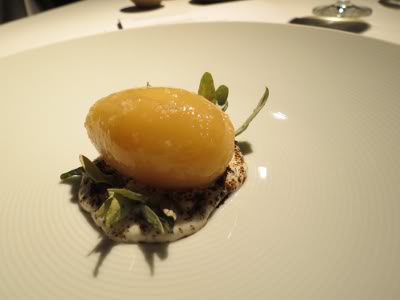 The potato is cooked for 12 hours in a rigged up version of a hāngi (using the actual soil that the spuds were grown in), resulting in a soft and waxy texture. The potato itself tasted like a good potato - it's a pretty simple flavour - but it was turned into something amazing by its accompaniments. It sits on a little puddle of goats curd speckled with coffee and coconut husk ash and then layered with crisply fried saltbush leaves. The coffee and coconut ash added an indescribable depth of flavour to the goats curd, and the saltbush gave a bit of crunch to an otherwise smooth dish. Another winner.

We'd spotted the next dish on its way to other tables all night long - turns out it's the first dish in the regular degustation. It had a slightly foreboding name for an anti-tomato activist like myself: Tomato, smoked sesame, 11 basils. 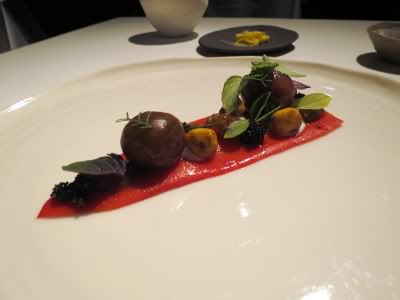 This was a compressed slice of capsicum topped with smoked black sesame seeds, spiced hazelnuts, sheep's milk yoghurt, a couple of skinned black Russian cherry tomatoes, the inside goop from some other tomatoes and 11 kinds of basil leaves (all plucked from the Attica garden). This had a very Italian feel, with the tomato/basil/cheese combo, but the introduction of the smoked sesame seeds and spiced nuts took things a step away from a straight out reinvention of a caprese salad. I must say that the 11 kinds of basil were not particularly distinctive - again an idea a bit more about being clever than really adding specific flavours - but the whole dish worked really nicely together. Maybe if tomatoes want me to eat them in future, they should make sure they always get prepared by a 3-hatted chef.

We still had two savoury courses left, and next up was the richest of the bunch: kumara, almond, Pyengana. 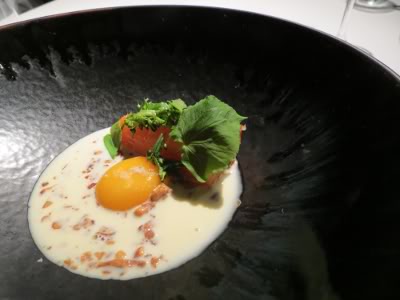 Pyengana turns out to be a cheddar cheese, which is turned into an astonishlingy good creamy sauce and poured over the rest of the dish at the table. The base of the dish is a sprinkling of almond pieces slow roasted in butter and garlic, there's a big wodge of nicely cooked kumara (sweet potato) on top of a shallot puree, a slow cooked egg yolk, broccolini buds and buckwheat leaves. Wowsers. This is a rich dish, but it works perfectly - the textures and flavours are all strong, but they don't overpower each other and you're left with a really wonderful melange. I think this probably won out as my favourite dish of the night (olive oil emulsion aside).

Onto our final savoury of the night: mushrooms, mulled wine and pearl onions. 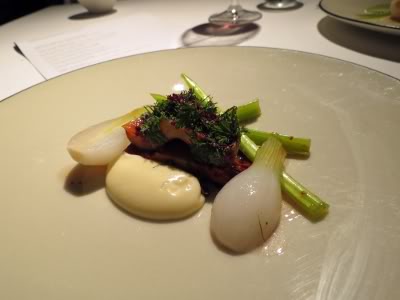 The centrepiece of this dish was a couple of pieces of slippery jack mushroom, cooked in a vanilla mulled  wine and covered in herbs and freeze-dried black currants. There were a couple of half-bulbs of pearl onions and some compressed onion stalks, served along with a parsnip puree. The mushrooms were fantastic - some sweetness and acidity after the heavy richness of the previous dish, but the onions were a bit more trouble than they were worth. We both had trouble chasing them around the plate and, while they were soft and tasty, they didn't really wow either of us. 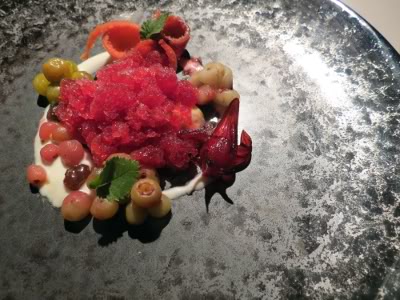 Another parochial dish, made up of a range of native Australian goodies including lemon aspen, quandong, candied rosella, native limes, native currants and some others that we didn't get down. The fruits were served on a sheeps milk custard with a bush currant ice on top. Another very clever dish - it was great to have the chance to taste such a wide range of native goodies. Not all of them were amazing, but the freshness and bite of them all was a refreshing palate cleanser after the savoury courses.

The final listed dessert was the Plight of the Bees. 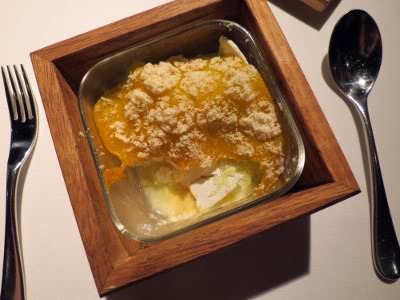 The top of this was a thin layer of dehydrated pumpkin covered in freeze-dried apple. Underneath was a while-thyme honey, thyme-infused cream enriched with egg yolk, meringue chunks, mandarin segments - there was fennel in there somewhere as well. Another wonderful combo of flavours and textures - the thyme came through in patches as did the fennel, adding some complexity to an otherwise pretty sweet dish. The pumpkin layer reminded me a bit of a roll-up, and the meringue was perfectly crispy.

We were a bit sad that neither dessert had featured chocolate, so when they offered us a bonus dessert inspired by Afghan Biscuits that included chocolate, cornflakes and walnuts we were sold ($15). 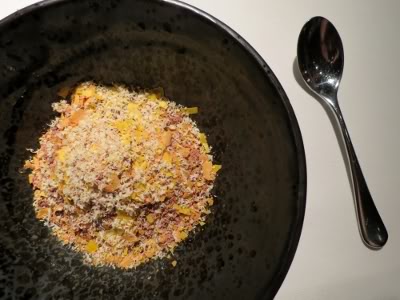 This was another dish that played with textures and temperatures - there was a big blog of deliciously rich ganache underneath the pile somewhere, along with a chocolate custard, freeze-dried cocoa mass, cocoa nibs, some sort of sorbet, chocolate pastry bits, sweet crumbled house-made cornflakes and grated walnuts. This was probably my favourite dessert - the combination of innovative techniques and varied temperatures added to some wonderfully rich chocolatey goodness. Seriously - every degustation needs a chocolate-based dessert at the end.

To end the night, we're presented with a pukeko nest with two speckled eggs sitting in it. Being a nerd, I checked the eggs against those in my iphone field guide (a pukeko is the New-Zealand name for the purple swamp-hen - see the eggs here) and was impressed by their ornithological accuracy. Kudos. 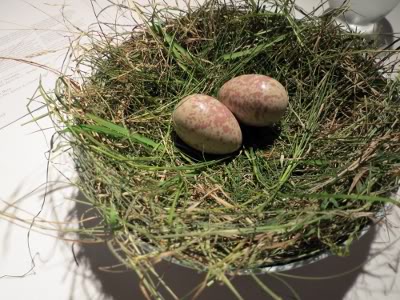 More importantly, they were wonderful - the inside filled with gooey, salty caramel. The pukeko nest is meant to represent Ben Shewry's approach to cooking - taking bits and pieces from other places and making his own beautiful concoctions. The metaphor seemed a bit stretched to me, but these were a lovely finish to possibly the most satisfying meal of our lives.

Our wait-staff were friendly and helpful (even stopping to explain what the crazy chemistry-lab-looking machine in the kitchen did), my matching wines were fantastic (even if I do remain largely uncultured - for all the sommelier's talk of 'minerality', I find myself with few decent adjectives to describe wine) and the setting was relaxed and simple. We quite liked Attica the first time we went, but things have clearly gone to another level since then - it's a wonderful restaurant doing food with a uniquely local inspiration (especially if you count NZ as local!). I can't recommend it enough - book in and try it for yourself.
____________

On the other hand, Food Lovers Society, Double Dutch Oven, Melbourne Culinary Journal and One Mouthful were a bit underwhelmed by the Attica experience.
____________

Accessibility: Attica has a couple of steps on entry. It's not too cramped inside given its overall size. The toilets are up another couple of small steps, although once you get there they're pretty spacious and easy to manoeuvre in. Lighting is low without being ridiculous. Ordering and payment are all at the table.
Posted by Michael at 11:20 am