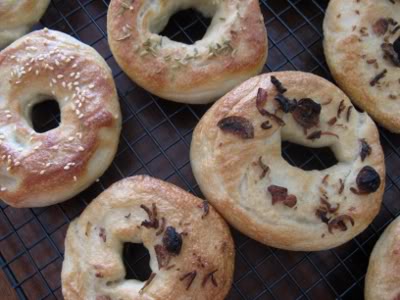 We've been plotting some bagel-making for a while, mostly inspired by the delicious CLT bagel at New Day Rising. Cindy had a pile of different recipes to choose from and I basically settled on the simplest one, courtesy of Peter Reinhart and the LA Times. It's a time commitment - the bagels need to rest overnight in the fridge, so you need to be a bit organised. It's not actually that difficult though, much less scary than I thought it was going to be. We made a double batch just so we got a decent pay-off from all the effort. And they all turned out pretty well - maybe a bit flatter and denser than we were hoping but the right combo of crispy outside and doughy middle. We'll definitely make them again, especially in conjunction with amazing flaked coconut facon (which we'll blog next!).


Bagels
(adapted slightly from this recipe in the LA Times)

In a big bowl, mix together the flour, 4 teaspoons of the salt, the maple syrup, yeast and water. We found it easiest to do this by hand - you've got to get your hands dirty and mix it all up until all the flour is absorbed and you've got a stiff, coarse ball. You can adjust the flour or water a bit if you need to but these proportions were pretty bang on for us.

Knead the dough on a lightly floured surface for a few minutes, until it starts to stiffen up and gets a bit glossy. It should still be a bit sticky but much less than when you started.

Place the dough in a lightly oiled bowl and cover. Pop the bowl in the fridge for at least an hour - we left it about three.

Before you start shaping the bagels, prepare however many baking trays you need to cook them (we used 3!). Line them with baking paper and lightly oil them.

Then take the dough out of the fridge and divide it up into about 16 equal pieces. Now shape these pieces into bagels! You've got two options: 1) roll the dough pieces into relatively flat discs and then punch a hole in them with your thumb, or 2) roll the dough out into a long sausage, about an inch in diameter and then loop the sausage around and much the ends together. Make sure the ends are nice and tightly joined. Try to get a fairly even bagel with about a 2 inch whole in the middle - ours probably didn't have quite big enough holes in them.

Place the formed bagels onto the baking trays, cover with glad-wrap and refrigerate overnight.

The next morning, take the bagels out of the fridge about 90 minutes before you want to cook them - they should be back at room temperature when you put them in the pot. When an hour or so has past, pre-heat the oven to about 225 degrees.

Fill a large pot with water and bring it to the boil. Once it's boiling add 2 teaspoons of salt and 2 teaspoons of baking soda. Gently drop in as many bagels as will fit into the pot (4 in ours) and simmer for a minute. Flip them all and let them poach for another 30 seconds and then remove, popping them back on their baking tray. Repeat until you've poached all the bagels and are ready to bake them.

Sprinkle whatever toppings you want on them and then pop them in the oven. They need about 20 minutes, with a rotation of trays about halfway through. They should be golden brown. Take them out and leave them to rest for 20-30 minutes.
Posted by Michael at 11:38 am