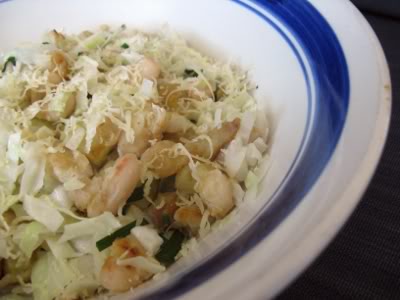 During those lovely days in Hobart, we had a commitment to attend to back home. Our previous vege delivery included an enormous cabbage - seriously, it was probably 2-3 litres capacity - and it was sitting in our crisper waiting to be eaten. We had ample time on Sunday afternoon to deal with it.
I was kinda bored with coleslaw, and spring rolls aren't the best work lunch leftovers. I wondered whether my newest cookbook included anything fun to do with cabbage, checked out the index, followed through to page 86 and realised I'd been over-thinking it. This lovely looking cabbage dish graces the cover of Super Natural Every Day!
It's the kind of dish Heidi does often and well - a bunch of fresh produce tossed together in a frypan, served up and sprinkled with a little something. In this case the produce is mainly cabbage, white beans and potatoes. I was a little wary of getting the potatoes completely cooked through purely by sautéing them for 8 minutes and was careful to cut them really small (cubes with no more than a 1cm side). This worked just fine. It's really important to wait out the frying as directed and build a golden crust on the potatoes and beans, 'cause this is where most of the fine flavour comes from. Of course a sprinkling of parmesan helps the flavour along too. As a vegan alternative, I'd suggest some extra salt, a bit of nooch or some of this stuff.
The recipe below is a double quantity on Heidi's version, since we had a lot of cabbage to get through. While her book predicts that this should serve eight, the two of us got a dinner and a lunch out of it each. We've got an appetite for cabbage that I never imagined.


Pour the oil into a very large frying pan over medium-high heat. Add the potatoes and a generous pinch of salt, tossing them to coat in the oil. Cover the frypan with a lid and give the potatoes 5-8 minutes to cook through, tossing them once or twice more along the way so that they don't burn but do develop a nice golden crust.
Add the beans to the pan and leave it uncovered, but go for the same cooking approach for a few minutes - leave the beans still to develop a golden edge, then toss it all around for a new crust on another side. Stir in the cabbage and chives, stirring and cooking until the cabbage just starts to soften. Serve it all up with a sprinkling of parmesan or some extra salt.
Posted by Cindy at 3:23 pm