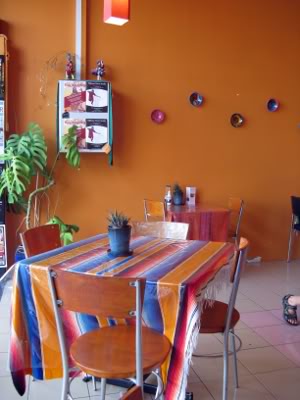 Cindy and I were at a loose end in Thornbury following Women of Letters and decided we'd just wander back along High Street until we came across somewhere we felt like eating. I had a vague idea that there was a newish Mexican place up there somewhere and when we ran into Gringo Vibes and saw that they offered veggie chicken as a filling our decision was made. 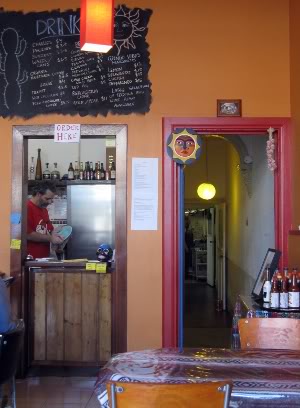 Once we sat down and thought about it a bit, we realised that we'd eaten at Gringo Vibes before - both at the Queen Vic Night markets and the Hispanic Festival. I'm not quite sure when they opened their own permanent cafe space, but they've done a nice job of making it cheerful and inviting. It's all very casual, and they do a decent amount of takeaway as well. The menu is a bit more diverse than their mobile offerings - there are burritos, enchiladas, tacos and quesadillas along with a range of sides and some nacho-related options. Most of the veggie options are cheesy, but plenty are vegan-adaptable, although I'm not sure whether there's actually vegan cheese involved or if they just replace it with guacamole or something. There are also a fair number of gluten-free offerings. 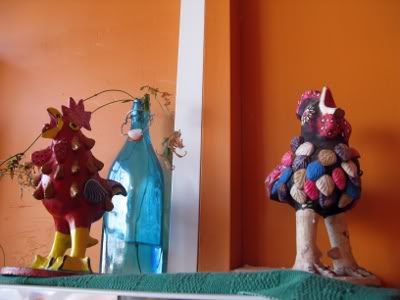 Cindy had a powerful mock-meat craving, so she ordered the veggie chicken quesadillas ($14, served with rice, beans, salsa, sour cream and guacamole). 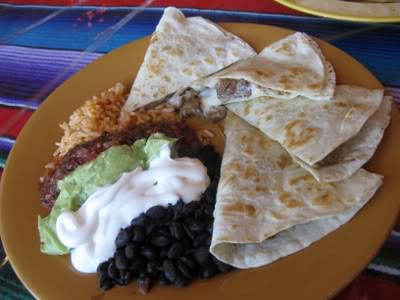 This is a nice colourful dish - the range of sides lifting it from its potentially cheese-heavy glugginess. The mock-chicken was a pretty excellent idea - I think this is the only place in town offering mock-meat Mexican, but as far as I'm concerned it's an idea well worth exploring further.

I decided to stick with something beanier though, going with a refried bean burrito (they also do a black-bean one), which came stuffed with beans, cheese, rice, lettuce, salsa and sour cream with a side of house-made corn-chips ($12). We also ordered a spare guacamole to share around ($3) - it was a bit smoother than my ideal guac, but did a nice job of soothing my mouth when I got carried away with the hot sauce. 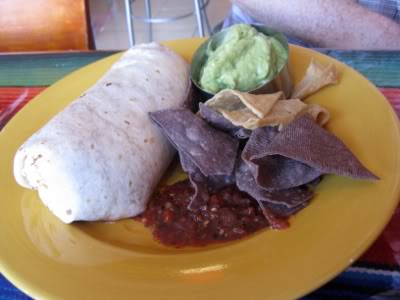 The burrito was kind of old-school. Not for Gringo's the crisp, fresh fillings on offer elsewhere - this is heavy on the mush. Which I kind of liked - beans and rice in particular are pretty sure-fire burrito fillings, and at $12 this was a massive and filling treat.

Gringo's version of Mexican food is cheap, veg-friendly and plentiful. Throw in friendly staff, a nice casual venue (that's licensed!) and a location on a fairly dead section of High Street and it's easy to imagine them doing a roaring trade. It's probably not the kind of food you'd travel especially for but if you're in the neighbourhood, you'd be well advised to check it out.
_____________


Accessibility: There's a flat entryway and things are moderately spacious inside. Ordering and payment happens at a nice, low counter. We didn't visit the toilets.
Posted by Michael at 2:53 pm