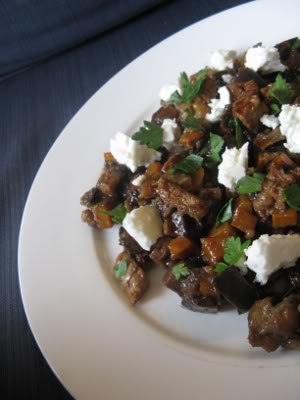 This is one of the recipes that I was first drawn to when given Super Natural Every Day last year - caramelised tempeh chunks will do it for me every time! But it was a whole pumpkin arriving in our vege box that got us there. Michael meticulously chopped the pumpkin, tempeh and eggplant into 1cm cubes and took a sizable cube off his finger while he was at it, so I helped bandage him up and finished this dish off.
The vege cubes are roasted in a tangy blend of pomegranate molasses and olive oil, then served with a sprinkling of fresh herbs and feta. It's lovely on its own as a whole meal or a starter, served with couscous or quinoa or shared at a potluck. For a vegan version you could obviously just skip the feta - or make vegan feta! - but I reckon some roasted flaked almonds or roughly chopped smoked almonds would make a fine substitute.
My one cooking tip here is to arrange the roasting bits sparsely on their baking trays - this allows them to caramelise properly. I started out with the huge quantities below (roughly double Heidi's original) stuffed high in their trays and they got soggy. Taking the time to bake smaller portions in batches is well worth it.


Preheat the oven to 180°C. Line two large baking trays with paper.
Peel the pumpkin. Chop the eggplants, tempeh and pumpkin into 1cm cubes. Finely chop the garlic. Divide the vegetables and garlic evenly across the baking trays and grate over the zest of the two lemons (set the rest of the lemons aside for whatever else you want).
In a bowl, whisk together the pomegranate molasses, olive oil, salt and chilli. Pour three quarters of the dressing over the vegetables and toss it through to evenly coat them as best you can.
Now the veges will bake best if they're spread out with minimal overlapping. This meant I had to set aside half the vegetables and bake them in two batches. The baking totalled 60 minutes per tray, with a few pauses to toss them around for even cooking. They should be tender but still holding their shape when they're done.
Once the vegetables are cooked, spread them out on a platter. Sprinkle over the parsley and feta and serve.
Posted by Cindy at 10:31 am