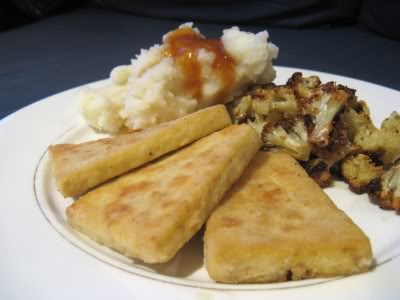 One of my guiltiest pleasures before going vegetarian was KFC. I still get cravings for chicken fillet burgers that are completely out of proportion to the actual enjoyment I would derive from eating said burger. 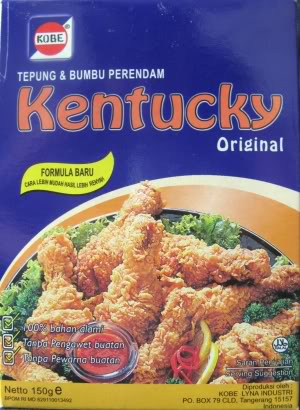 So naturally, when I saw this 'Kentucky style fried chicken' crumbing mix in an Asian supermarket, I had to give it a go... on tofu. Even if this did taste like KFC (it doesn't), Colonel Sanders' secret combination of eleven herbs and spices would hardly have been exposed - the ingredients list in its entirety reads "wheat flour, salt, spices, herbs, flavour enhancer".

And if this crumbing doesn't taste like KFC, it does at least taste good. It's spicier than the Colonel's original recipe, and I think the dominant flavour is cumin. At only a couple of dollars for a box (this will coat enough tofu to make us two or three meals) it's a fun alternative to our usual tofu preparations. However, with a large collection of dried herbs and spices already on hand, I'd like to start developing my own secret seasoned flour recipe rather than buying more.

To get into the pseudo-KFC groove, we accompanied the tofu with mashed potato and gravy, and popcorn cauliflower.
Posted by Cindy at 8:26 am