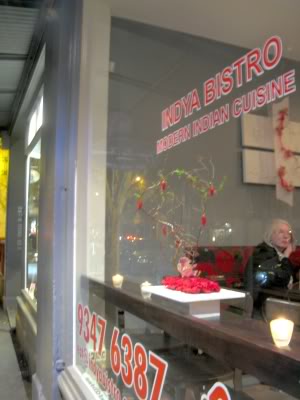 Cindy and I were at a loose end on Friday night and, with the weather a bit on the ugly side, we wanted to go somewhere local to eat. Without any particular inspiration, we decided just to wander up Rathdowne Street and see what we stumbled across. Surprisingly (to me anyway), the little Rathdowne Village strip is pumping of a nighttime, with places like Rathdowne Street Foodstore and Black Ruby open for dinner, and the usual suspects like Zum Zum bubbling along. Amidst it all was a brand new place: Indya Bistro, a fancy looking Indian restaurant.

It was pretty quiet, with a few curious diners taking up some of the tables, and friendly staff greeting us and ushering us to one of spare tables. The menu is quite small for an Indian restaurant, without the dozens and dozens of curries you get at a cheaper takeaway place. For the non-meat eaters, there are even fewer choices: five entrees and four mains.

Cindy, typically, was much more excited by the entrees than the mains, and was particularly taken by the promise of 'Mumbai fries' ($7) - crunchy potato masala fries, Mumbai style. 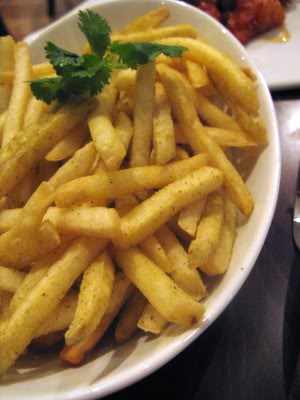 Turns out that these are basically just fries, with a few interesting spices on them. The flavour reminded Cindy and I of some crisps we'd bought from an Indian grocer before, and the whole experience made me feel a little dirty. I mean, chips! At an Indian restaurant! It just doesn't feel right.

To accompany her chips, Cindy went for something that sounded at least slightly more healthy: gobi florets ($7), cauliflower florets tossed in a honey garlic sauce. 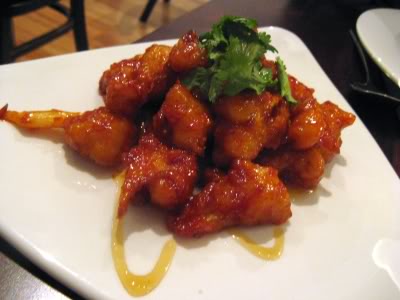 Turns out these were probably even less healthy than the chips. Imagine crispy-fried honey chicken but with cauliflower instead of chicken in the middle. This was sweet and oily. And delicious - let's not forget delicious. A very odd dish for an Indian place, but one that was insanely addictive. I could have kept snacking on them all night.

Being more of a traditionalist, I couldn't order anything but a curry with rice. I was tempted by the palak paneer, but decided to branch out and try something new: Diwani Handi Delight ($18), mixed roasted vegetables and cottage cheese in a funugreek flavoured sauce. 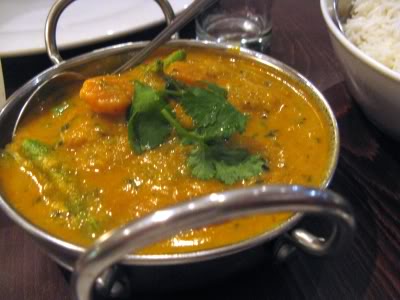 The first thing I noticed was the freshness of the vegies - when you're ordering a $10 curry, you kind of expect your vegies to be the dregs of the market, drowned in strongly flavoured sauce. But at $18, I had higher expectations for this dish, and I wasn't disappointed by the quality of the produce. The sauce was mildly spiced, and not particularly fenugreeky to my tastes, but enjoyable enough. If you ignore the price it was pretty impressive, but I'm not quite convinced it was worth $18.

Indya Bistro are just getting things going - they're still waiting on a liquor licence, and I'm hopeful that they'll expand their menu a bit as they settle in. Still, there's something a bit weird about spending nearly $20 on a curry, so for now we'll stick to cheap takeaways, tiffins and homemade alternatives.