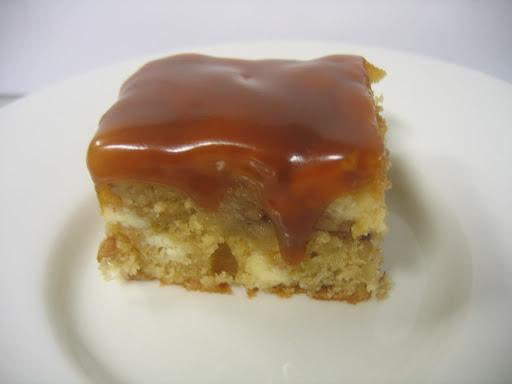 I've spent the last week at work collaborating with two Brisbane-based smarties, Eve and Will. We've been sharing a fun, challenging and very nerdy project and best of all, they're just cool people to hang out with. There've been outings to Kake Di Hatti and Markov Place, and when it was revealed that it was Will's birthday on Wednesday, I packed him a gift of cherry and vanilla icecream. 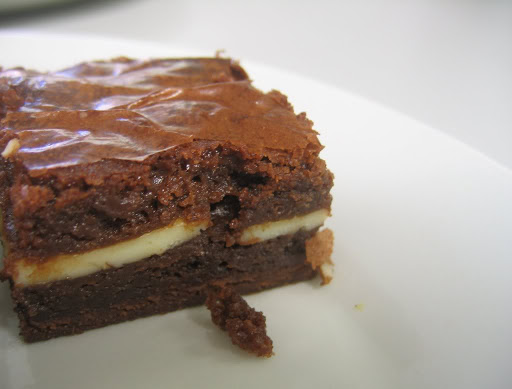 To welcome them to the lab on Monday I gathered all my local colleagues for afternoon tea and supplied trays of brownies and blondies. The brownies were Nigella's cream cheese variety, a recipe Michael has twice previously made to great acclaim. As for the blondies, these were an entirely new baking experience for me and I knew that Kitchen Wench would have the goods: white chocolate and walnut blondies with salted caramel topping. They are almost as over-the-top as the name suggests and at least as tasty. Most importantly the quantities Ellie gave yielded a sizable tray-full, because over twenty people turned up for a taste! Over the course of half an hour, much chatter and a few laughs, all that remained was one little blondie square to wrap up and take home to Michael. Oh, and about half the caramel topping, which I had packed separately and used sparingly. It found its way onto pancakes with pears on the weekend.

This recipe has been adapted at every step from the source, Sherry Yard, via David Lebovitz, Chubby Hubby and Kitchen Wench. Here's what I did.

Preheat the oven to 175 degrees C. Line a medium to large baking tray with baking paper and grease the inside (I use a canola spray).

Cream together the butter and sugars until fluffy. Beat in the eggs one at a time, then the honey and vanilla.

In a separate bowl, sift together the flour, baking powder and salt. Gradually add it to the butter mixture in batches, beating on low speed as you go. Stir in the walnuts and white chocolate.
Pour the batter into the prepared tray and bake for 25 to 30 minutes.

Once the blondie tray is out of the oven and cooling, prepare the sauce! In a large saucepan on medium-high heat, melt the butter. Add the sugar and stir frequently, until the sugar has dissolved and the mixture is a deep golden brown, just starting to smoke.

This is where things get a little scary. Protect your hands and arms with a shirt and gloves, then whisk in half the cream. It'll spatter about and you don't want to wear molten sugar. Stir in the rest of the cream, as well as the vanilla and salt. Allow it to cool a little.

[At this stage I packed up the blondies and caramel separately to take them to work. (Kind, patient Michael even walked with me to carry the second tray!) It only took 10 seconds in the microwave to get the caramel back to its gooey state.]

Poke holes in the blondie with a skewer, then pour over as much caramel sauce as you want. I only used about half of it. Slice and serve to the people that are no doubt surrounding you and drooling by this stage!
Posted by Cindy at 9:41 pm

Labels: Chocolate, How to be a Domestic Goddess, Internet-Sourced Recipe, Nigella Lawson