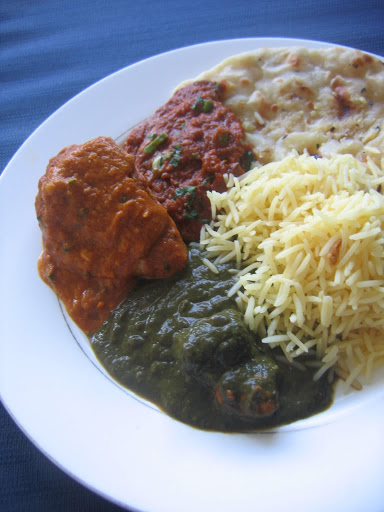 Cindy and I have blogged previously about our quest for an excellent Indian place. We've had a few successes, but mostly the local Indian places have been reasonably priced, reasonably tasty, slightly dull - nothing to really inspire our loyalty. Especially not when it comes to take away.

J-Wow told us that Spicy Junction on Johnston Street was worth checking out, so I wandered past on the way home to order something to take home and enjoy. The menu looked quite impressive, with loads of vego options, but they were inexplicably closed. Luckily I had a fallback plan - I'd wandered up Rathdowne Street on my way home one evening and stumbled across De Orchid, an Indian place about a block from our house that had completely passed us by. Luckily they were open and their menu was equally veg-friendly. We ordered three curries (to make sure we scored some leftovers for lunch the next day): Saag Paneer, Baingan Bharta and Malai Kofta - two old favourites and an eggplant curry that we'd tried once on our travels overseas and loved. We threw in a naan bread and some rice as well, making a pretty substantial load for me to bring home.

De Orchid delivered probably the best cheap Indian we've had in Melbourne: all three curries were impressive (and impressively creamy - it's probably best not to know any nutritional information about them), the bread was laced with garlic and cooked perfectly and the rice was... well the rice was just rice. The spice levels were about perfect for me, which meant they were probably a tad on the hot side for Cindy, but she still enjoyed her meal immensely - particularly the Baingan Bharta, which we have to try to make ourselves one day. The saag paneer was pretty good as well - rich and tasty, with a fairly generous scattering of paneer bits and the malai kofta, while a little on the saucy side, was not undelicious.

So, an unassuming local Indian place with nothing in particular to recommend it, takes the lead in our quest for a good local curry shop. We'll still give Spicy Junction a go, but it'll have to be very good to overtake De Orchid.

Update 4/9/09: After being 'temporarily' closed for nigh on a year, De Orchid has recently reopened. My first impressions: things have gone down hill - but we'll probably give them another chance and write a proper review.

Update 10/2/10: It appears that De Orchid is no more at this address. There's an Indian restaurant with a different name in its place, and we've not yet tried it. It's unclear whether the De Orchid has changed names, changed locations or disappeared entirely.