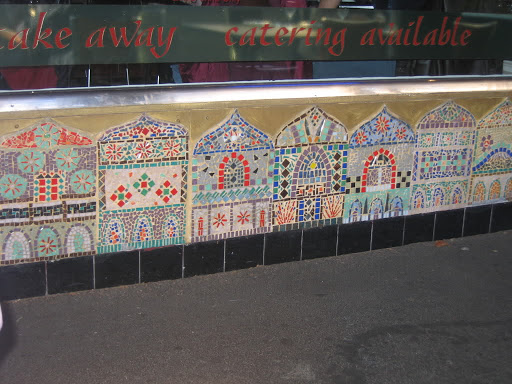 It's taken us a shamefully long time to make our way to Cafe Zum Zum - a place that gets both three stars and a giant 'V' in the Cheap Eats Guide and is all of 800m from our house. For some reason everything fell into place on Saturday and we finally made our way there. Not without a short detour via Zucca, another semi-fancy place on Rathdowne Street starting with 'z'. When will Cindy learn not to trust me when I tell her, "I know where I'm going."? Thankfully it was only a short detour and, once I'd recovered from my confusion, we mosied north along Rathdowne until we stumbled onto the correct venue.

Cafe Zum Zum is quite small and quite popular, meaning disorganised people like us turning up without a booking on a Saturday night are taking a fairly big risk. We were able to get away with just a fifteen minute delay while a prime footpath table was vacated for us, but for future reference: make a booking! A perusal of the entree side of the menu demonstrated how they'd earned their Cheap Eats 'V' - more than half of the dishes were vego. The mains were less veg-friendly, with just a tempting sounding tagine scattered amidst the lamb and seafood. Cindy convinced me not to order the tagine (which wasn't easy - it had pickled chillies in it!) and we instead decided to share four of the entrees between the two of us. We were tossing up between three and four, but the waitress reckoned that three would fall short. Either she's a big eater or she suckered us in - three would have done the job perfectly. Anyway, choosing four meant we got to sample a bit more of the menu, and walking away with your belt straining is a small price to pay for a more complete experience.

Things started off in the pleasing light of a summer's evening with our first two dishes: Sambousik (feta and mint pastries) and fatteh (warm chickpea salad mixed with yoghurt and tahini dressing, servied with toasted Arabic bread). 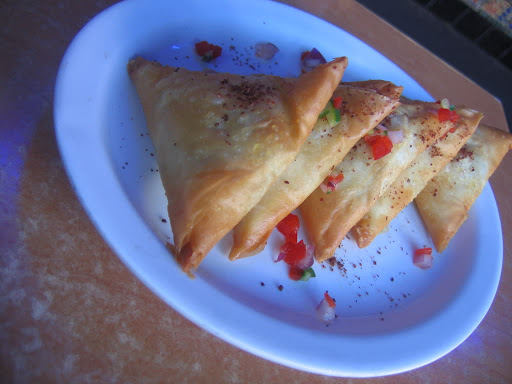 The little pastries were an exquisite start to the meal, somehow managing to seem light and almost healthy, despite being made of little more than pastry and cheese. The pastry was the key I think - crisp and airy without any dense sogginess. The cheese and mint mixture was light as well, crumbling in your mouth perfectly. A good start. 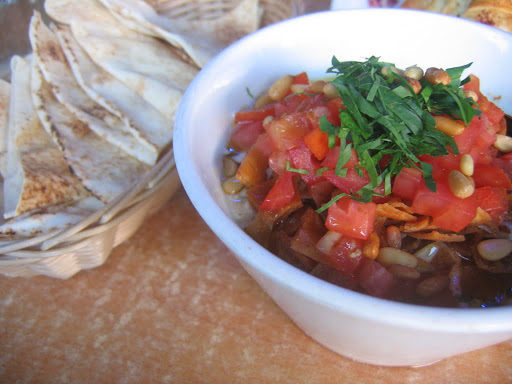 The fatteh was almost as good. It's reminiscent of the famous Moroccan Soup Bar chickpea thing, but the dressing's a bit runnier and it has a nice layer of fresh tomato and parsley on the top. There are some fantastic little chips of crisply fried bread scattered throughout and some less crispy pita triangles on the side. I'm not sure it quite tops the Morrocan Soup Bar's effort, but it certainly comes close.

Unfortunately as the night went on, the sun went down, and we were left sitting under some fairly unappealing blue-coloured fluoro lighting (similar to the lights in public toilets that are meant to make it difficult to inject drugs). While the lighting doesn't really kill the mood, it certainly kills the photos, and we ended up only able to salvage a decent picture of one of our last two dishes. We'd ordered the Felafel (with tahina sauce) and the Portabello Mushrooms (sauteed with coriander, capsicum and pomegranate essence). 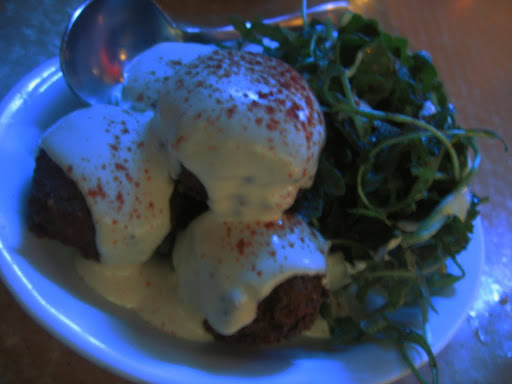 The felafel came out first, smothered in tahini and dusted with paprika. The felafel balls were impressive, but were topped by the thick, strongly flavoured tahina sauce. The whole dish was another winner, and it was at this point that both Cindy and I started to fill up. Which was unfortunate, because the bulkiest dish was yet to come.

The mushrooms were too dark to be pictured in the fading light, and were a bit too dense for us to really enjoy on top of the rest of our meal. The flavour was interesting - much sweeter than I expected, with the pomegranate and capsicum quite influential. It's hard to know whether it was just our fullness at work, but these were probably the only disappointment of the night. I'd have quite enjoyed them as a smaller side dish with something else accompanying them, but on their own they ended up being quite hard work. Still, they weren't bad by any means, just not up to the standard of what had come before.

We were too full to sample the dessert menu, but I enjoyed a well made coffee before we strolled back towards home. So once again, The Cheap Eats Guide comes up with the goods - Cafe Zum Zum is well worth a visit, and easily outstrips Abla's as the local Mediterranean restaurant of choice (for vegos anyway). I'm keen to return and try the tagine, and I wouldn't be surprised if Cindy fancied the panfried haloumi cheese with zaatar. We'll keep you posted.

Labels: Carlton, Pies and other Pastries