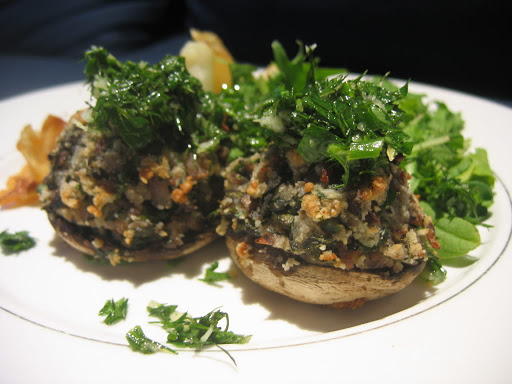 It's hard to believe that it's taken us more than a year of blogging before we finally got around to stuffing some mushrooms. They're such a vego staple, it's difficult to explain how we've neglected them for so long. Luckily, Cindy had tucked away this recipe for when the mood finally took us. I'm not sure how she's still keeping up with Ready, Steady, Cook, but her efforts were rewarded with a delicious dinner thanks to Dominique Rizzo from Mondo Organics (and my sterling efforts in the kitchen of course).

This recipe has the added bonus of being vegan - it's predominantly mushrooms and herbs, with a heap of almond meal to give it all some body and texture. The herb and lemon gremolata gave a nice citrusy kick to the meaty mealy mushrooms, and the whole meal was topped off with some salty baked spud-bits that Cindy sorted out. I won't reproduce the directions, but feel free to muck about with the quantities - the recipe at the end of the link is designed to produce 1 entree (we multiplied by around 8). We ended up with a lot more filling than could fit in the mushrooms - so either get really big mushies, or fiddle the proportions a little.
Posted by Michael at 2:14 pm