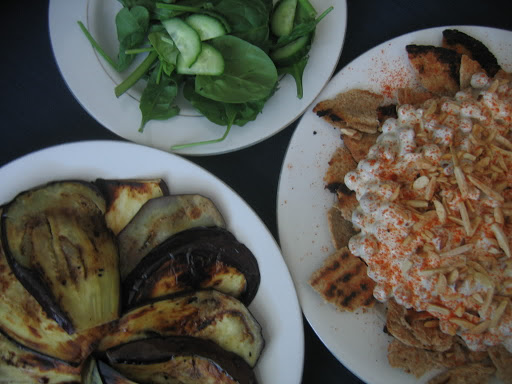 This dish is long overdue. It's been more than a year since I first visited the Moroccan Soup Bar and had my first taste of "that chickpea thing". It's got chickpeas and yoghurt, something crunchy and something nutty, and it captivates all who taste it. What's the secret? Lemon juice? Tahini? They're probably both in there, but surely there must be something else that lifts this bowl of legumes to such heights?
I revisited the restaurant for Beth's birthday, scrawling down a guessed ingredient list as I ate and then overhearing the recipe explained by another birthday guest further down the table. In spite of this nudge, my notebook filled up with other dates and restaurant menus and I actually forgot about the chickpea thing. The real kick-in-the-pants came from Anna's post of fatteh on Morsels & Musings. Her personal amalgamation of different recipes looked pretty close to what I was after, so I made a few more adjustments to fit with my old ingredient list and away we went!
The rye pita that Michael picked up from the grocer wasn't ideal for this meal. The objective is to toast the pita to crunchy-brown and break it into shards, but these ones were thicker and softer. Otherwise this was everything I was after. Michael well and truly made up for the pita mishap by choosing King Island yoghurt for the dressing. Mmmm mmmm. Lemon juice, tahini, roasted almonds and a sprinkling of cayenne round this out wonderfully. 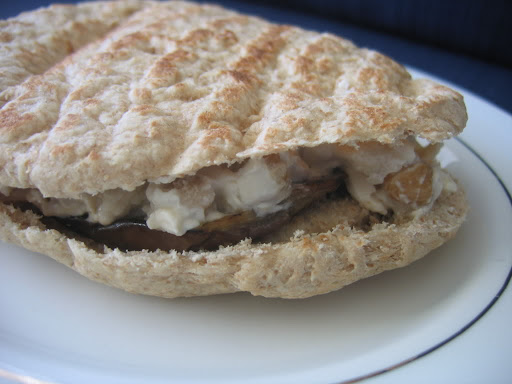 On the side we enjoyed a simple green salad and some fried sliced eggplant. The eggplant is also inspired by another dish from the Moroccan Soup Bar, but is my own version and hopefully a bit lower in fat. We doubled the chickpea recipe and I stuffed the leftovers and some eggplant slices into the remaining pita pockets for lunch. 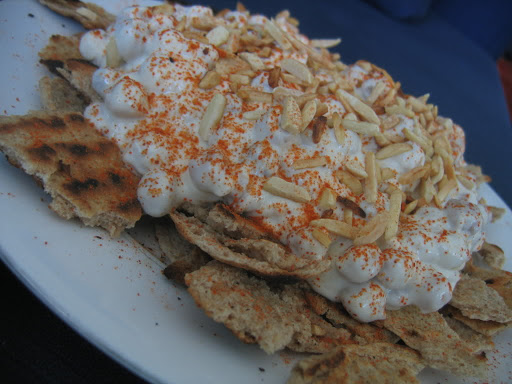 Drain and rinse the chickpeas. Put them in a saucepan and cover them with cold water. Bring them to the boil and cook for about 7 minutes, until tender.
Gently dry roast the almonds in a frypan until fragrant and brown. Set aside.
Use the same unoiled frypan to toast the pita bread until brown and crunchy. Break it into pieces.
In a medium-sized bowl, whisk together the yoghurt, tahini, garlic and lemon juice. Add some of the water from the chickpeas to thin out the dressing a little. Stir in the chickpeas.
Arrange the pita piece in a bowl or on a plate and spoon over the dressed chickpeas. Sprinkle over the almonds and dust with cayenne pepper. 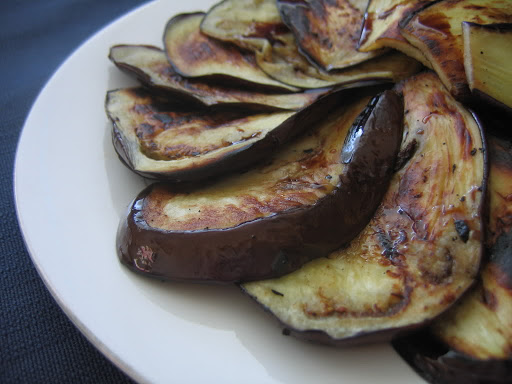 Slice the eggplant lengthways into pieces about 8mm thick. Fill a large saucepan or baking dish with salted water and soak the eggplant slices for about 15 minutes. This will not only reduce the bitterness, but prevent too much oil from soaking into the eggplant.
Brush a frypan with oil and bring it to medium-high heat. Fry a few pieces of eggplant at a time, arranging them so they don't overlap. Brush the top side with olive oil just before flipping, and turn them over only when they're golden brown.
Transfer the eggplant to a plate and repeat with the remaining slices. Drizzle them with balsamic vinegar and serve hot or at room temperature.
Posted by Cindy at 9:01 pm