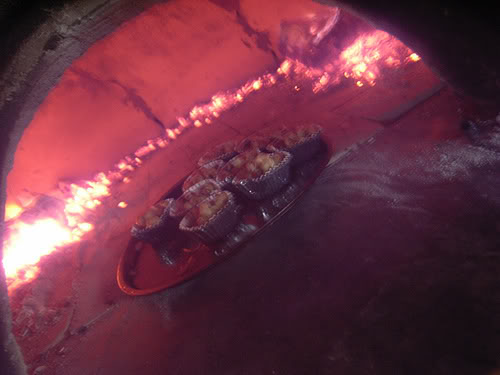 photo taken by Ed from Tomato
Food preparation for Monday night's dinner was a more nerve-wracking process than usual. Usually it's just me in the kitchen, with Neighbours on for company, putting together something to greet Michael with after his netball game and then to pack into lunchboxes for Tuesday. Contrary to what the above picture might suggest, neither was I cooking for Satan on this particular Monday. Rather, I was contributing food to a Bloggers' Banquet, a chance to meet other food bloggers in Melbourne face to face, palate to palate. The venue was the Vegout Community Garden in St Kilda, which features a wood-fired pizza oven.
Naturally, the weekend was spent carefully planning and preparing my offerings. I needed to choose food that could be created in advance, transported easily via tram, preferably finger-friendly to share among the crowd, and served either at room temperature or hot out of the pizza oven. Sweets were easy - with ingredients I already had on hand, I whipped up a double batch of ginger chocolate clusters. Something savoury was a bit more challenging, but when I saw Vanessa's shiitake mac & cheese cupcakes I had precisely her reaction: "good God YES!"
I figured I could make up the mac & cheese mixture on Sunday night, bake a few as a test run, then bake and pack the rest on Monday evening. The test run ones were OK, but they didn't hold together all that well. For the main event I decided to skip the breadcrumb step and bake these straight into shiny cupcake papers, ensuring that they'd be easy to handle. When I arrived at Vegout and saw the homemade pizza dough and table heaving with other gourmet treats, I actually thought twice about bringing out my cupcakes. The day in the fridge had caused the brown mushrooms to spread their grey juices through the macaroni, and pasta with cheese just seemed a bit dull. Eventually I decided to go ahead and put them in the oven queue for a quick heat-up before offering them around. To my surprise and relief, they were warmly received. All 22 of them disappeared, and a couple of people confessed to going back for seconds, one person even for thirds. 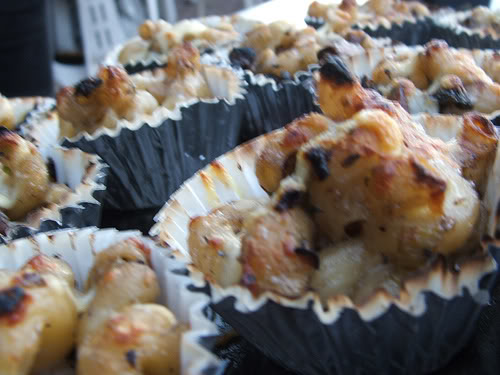 photo taken by PG, the Goddess in the Kitchen
Of course there were many, many other fabulous dishes to enjoy on the night and I didn't pay any attention to my own cooking. And what of the people behind the food? Here's the goss according to Cindy...
It was a pleasure to meet every one of them. (You can 'meet' them too on a joint Flickr page.) Here's to another Bloggers' Banquet before summer escapes us!
Posted by Cindy at 1:33 pm