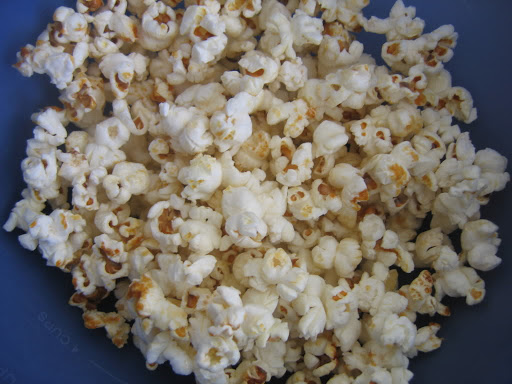 Maybe this isn't the most exciting food photo you've seen around the blogosphere today, but it's a picture of one of my favourite snacks in recent weeks. It's a bowl of saucepan-popped corn, seasoned simply with sugar and salt. Doesn't thrill you? That's fine, but it's become a darn addictive combination for this afternoon snacker.
I'll get about a dozen bowls out of one $3.50 packet of organic corn so it's light on the pocket. I've tried to keep the sugar and oil levels down, so it's probably a lot lighter in calories than any instant-microwave-bag version too. If you're willing to stretch from 'instant' to 'takes 3 minutes' then I encourage you to give it a go.
Sweet'n'salty popcorn

Pour just enough oil into a medium-large saucepan to thinly cover the base. Spread the popcorn in a single layer over the bottom of the saucepan and set it on medium-high heat. Put the lid on and shake the pan in a horizontal motion to get the popcorn evenly distributed and lightly coated in oil.
Sprinkle over the raw sugar and replace the lid. Keep the saucepan over medium-high heat, shaking again roughly every 15 seconds. The corn should start popping pretty soon! Continue periodically shaking the pan horizontally just above the heat source as the corn pops, until the time between pops stretches to about 3 seconds. Turn off the heat. Continue shaking the pan for another 15-30 seconds until it's all popped out.
Pour the popped corn into a bowl and discard any burned ones that might be near the bottom (I'm getting better - no burning in my third batch!). Give the popcorn a light sprinkling of salt and get munching while it's still warm!
Posted by Cindy at 2:13 pm