With three MOFOs and one dark MOFO under our belts, we've accumulated a few favourite eating spots around Hobart that we look forward to revisiting each year. Here are quick updates on the ones we checked out this summer.
____________

I made a point of introducing Michael to Mo Mo Bubble Tea & Coffee House, having lunched there during my solo winter trip. It hasn't changed a jot - massive, messy mock meat burgers ($8.90) and sugary fruit teas (from $3.50) are the definite vego highlights. The soy bounty burger had a nifty beefy-mushroom texture, but my loyalty lies with their fake fish.
(Read the full details in my previous post here.)
____________

Pigeon Hole has changed hands since we last breakfasted there, but we barely noticed. With the vegetarian beans gone there's not a lot to attract vegans, but the eggs en cocotte menu is near identical. Michael liked his tallegio, preserved lemon and lovage version ($12.90), though it was small and he was soon hungry for lunch. The chalkboard menu was completely absent of sweet options (not even muesli!) so I picked out a cheese and spinach calzone from the baked goods on display, and we later shared a cherry pastry. I liked their rustic approach to dough and ate with my hands.
(Read about our first visit to Pigeon Hole here.)
____________ 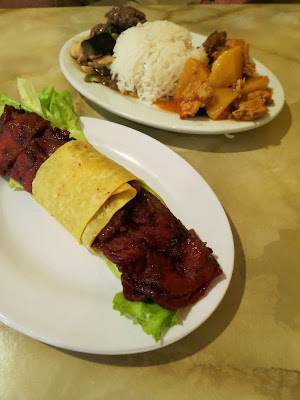 We hit Chai Vegetarian Cuisine for a late lunch. Their display-box food ($11 per plate, pictured back) was far from its optimal texture by then but the spicy curry still had its appeal. I was glad that I returned for the spicy roll ($5, pictured front) - the faux pork was terrific.

I have sworn off the Saturday Salamanca Market in favour of Sunday's Farm Gate Market. For late risers like us, it's worth skipping breakfast and feasting on site - I devoured an enormous haloumi burger one-handed while we waited for Michael's tofu burrito and takeaway coffee. The market has definitely grown in the past year and though there are butchers and cheesemongers, vegan options are also plentiful. We made sure to pick up olive oil-based soaps, home-made jams and tea for our house-sitter, a couple of the less-healthy treats from Mrs Rees, and half a kilo of cherries (those were gone within 24 hours).
(Here's my haul from my first time at the Farm Gate.)

____________
While we certainly consumed our fill of food and art in Hobart, we failed to squeeze in faves like Dumpling World, Garagistes and Thai Veggie Hutt. But there's always next summer, right?