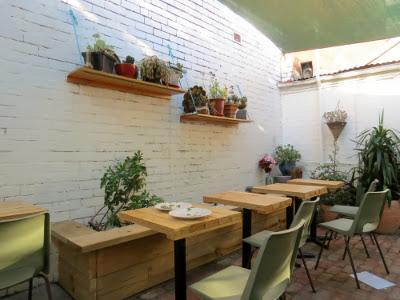 We've been regular customers at Mankoushe since the Lebanese bakery opened on Lygon St three-and-a-bit years ago. Co-owner Jad always recognises us and takes a moment to say hi; somewhere along the line he figured out that we're those vego bloggers. We've consistently and happily paid our own way during our frequent visits but recently accepted an invitation to try some of their new bakery menu on the house. So take this rare freebie post in that context.


We took a seat out back where it's shady, it's a little easier to talk over the soundtrack of Leonard Cohen and Zeppelin, and I could have a peek at their herb garden. The menu's a good one for veg*ns - classics such as the herb bread ($3), my beloved haloumi pie ($5.50) and Michael's favourite falafel wrap ($8.50) are still available and there's a new section of eight fancier vegetarian pizzas that nudge into double-digit prices. Vegan options get a (v) and cover almost half of the vegetarian menu. Spelt flour dough is available on request, but the bakery's probably best avoided by those eschewing gluten entirely. 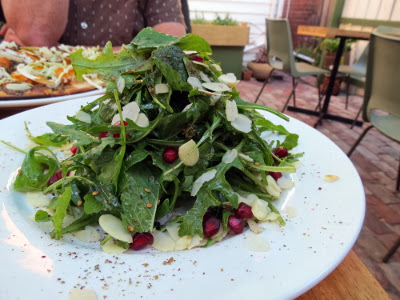 There's also a salad ($7) and a dip ($6-9) on the menu; they'll shift around depending on what fresh produce takes the Choucair brothers' fancy each fortnight. We loved this summery green salad with mint, pomegranate seeds and flaked almonds. 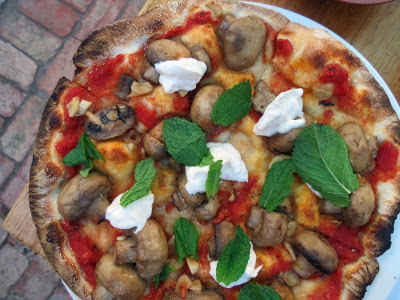 As for the the pizzas, we first chose the fitir ($10), spread with tomato sauce and dotted with plump garlic mushrooms, baked to a crisp and then topped with dollops of chilli labneh and fresh mint leaves. 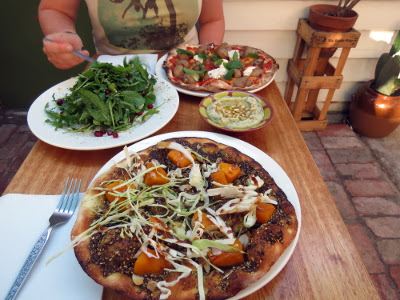 The earthy vegan-friendly laktin ($11) was just as lovely - instead of tomato the base has a charred oregano-sesame layer, generous chunks of cinnamon pumpkin and is finished with finely shredded fresh cabbage and a dizzle of pomegranate molasses. (In this picture you'll also spot the herby sweet potato dip currently on rotation.) 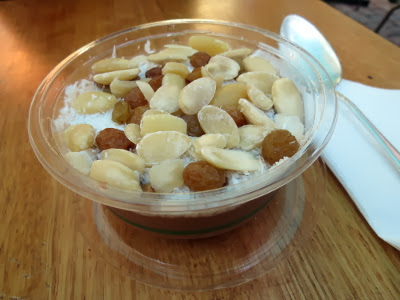 Jad insisted on packing us off with some dessert. He explained that this cinnamon semolina pudding ($7) is traditionally made to celebrate the birth of a child. It's surprisingly smooth and velvety, deeply spiced and topped with almonds, sultanas and dessicated coconut.

Mankoushe has built its reputation on its wood-fired oven and Lebanese heritage (not to mention their love for Bob Dylan at top volume!), and they're developing a wonderful, seasonally responsive way with fresh local ingredients. Without a doubt, we'll be back to try the other six new veg options out of our own pocket.


You can also read our previous Mankoushe Bakery (one, two) and Cafe (one, two) posts. Since my last collation I haven't spotted any new blog posts about either venue.
____________

Accessibility: There's a small step up through a narrow-ish entry and a bit of space in the front room. Toilets and courtyard are accessed via a couple of steps and a narrow, bricked path. We usually order and pay at a low counter.
Posted by Cindy at 4:01 pm