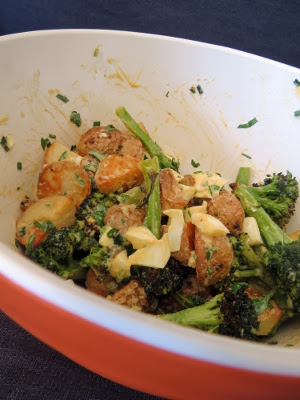 We had a rare non-vegan (but still gluten-free!) potluck on the last day of our summer holiday and a balcony garden sprouting both tarragon and chives. We trawled our recipe books for some sort of sharable salad and Cindy spotted a recipe for broccoli gribiche in Heidi Swanson's Super Natural Every Day that used up our herbs and looked delicious. It's a bit of a fancied up potato salad - the broccoli provides some vegetable variation and the very French dressing adds something new.

Making it is pretty simple really, although a bit time-consuming. The dressing process was a bit frustrating - as hard as I whisked I couldn't really make the egg yolk and oil emulsify. I may have over boiled my eggs slightly - the hard yolk didn't mash into a very smooth paste. It didn't seem to make much difference, the dressing was still delicious - tangy from the vinegar, rich from the egg and oil and bursting with the flavour of the fresh herbs.

It's probably not something we'd make just for the two of us to eat, but it's a brilliant addition to a potluck lunch (which featured wonderful white bean soup, a haloumi and vegetable medley, patatas bravas, homemade baba ganoush, zucchini fritters, coconut icecream and on and on and on - it was a lazy five hour lunch).

Toss the potato pieces with a tablespoon of the olive oil and sprinkle them generously with salt. Tip them onto a baking tray and roast for 30 minutes, turning halfway through.

Toss the broccoli florets with another tablespoon of oil, add salt and tip them onto a second baking tray. When the spuds are halfway along, pop the broccoli into the oven and cook for 15 minutes - the veggies should finish at the same time.

While everything is roasting make the dressing. Mash the yolk of one of the eggs and whisk it together with the remaining olive oil (tip the oil in very, very slowly). Beat it constantly and try to get the egg and oil to emulsify. Whisk in the vinegar and the mustard and then stir in the capers and herbs plus a decent shake of salt.

Chop up the two whole eggs and the remaining egg white (you can include more hard boiled eggs if you want - the original recipe has 4 rather than 3) and fold them into the dressing.

Combine the spuds and broccoli and then gently toss the eggy dressing through. Season if required and serve.
Posted by Michael at 7:24 am