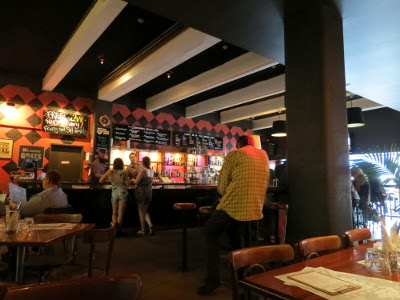 We have been occasionally hitting up The Cornish Arms on Sydney Road for lazy junk-food dining and decided we should finally blog it again. They seem to tweak their menu semi-regularly, but maintain a substantial list of vegan pub food for those of us who are nostalgic for parmas or chicken burgers. It's heavy on the mock meat - there's dishes like the mixed grill (faux duck, facon, meatballs and pate with salad and bread, $21), a mock chicken burrito ($19), a duck-based steak sandwich ($19) and a banh mi (starring bbq pork seitan and mushroom meatballs, $20) alongside a couple of non-mock options (Massaman curry $17, portabello mushroom burger, $17). Let's be clear: this is not the place to go if you're after something fresh and healthy - your meal is going to be huge, it's going to be fried and it's going to be salty. That's just the way things are at The Cornish.
I completely embraced the mock-meat theme and ordered the double-down burger ($20, based on the KFC abomination of the same name). The simple (and horrifying) idea behind the double down is the replacement of the regulation burger bun with chicken patties. So the Cornish double down is two gigantic crumbed pieces of mock chicken surrounding a slice of facon, some tomato and some melted Cheezly. With sauce. 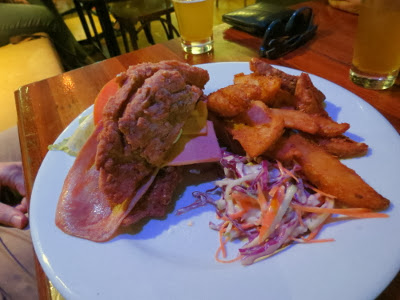 It's clearly a ridiculous meal, but not without its oily charms - the chicken pieces have a tasty crumb and are pretty decent gluten-based mock meat, the facon is excellent and the whole experience is gleefully gluttonous. The cursory slaw doesn't add much in the way of veggies, and the wedges (while excellent) are just more fried goodness. The double down won't be for everybody, but it definitely won itself a fan in me.
Cindy decided to sample the fish and chips, having heard that they'd worked on the batter since our first trip. 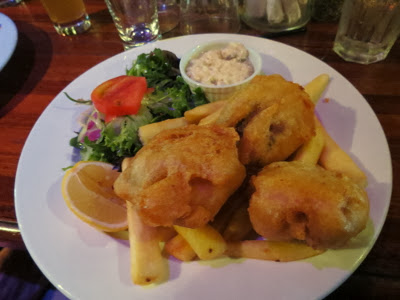 As you can see, they really have - these are now more batter than fish. Crispy and not too oily (while clearly having just been deep-fried), the batter coats three biggish chunks of tofu-based fish, with most of the fishy flavour really coming via the vegan tartare sauce. It was too much for Cindy to eat, but she looked pretty content when she gave up.
The Cornish is a trusty vegan-friendly pub in Brunswick that will fry you up some mock meat and help you recapture fond memories of old school pub food. The prices are a bit steep, but it seems vegans will pay good money to places that look after them - it's almost always full. There's a great range of beer on tap, a nice courtyard and regular bands/entertainment (of varying quality it must be said). Our experience of the service in the past has been up and down, but things ran pretty smoothly on this visit.
____________
Read about our previous visit to The Cornish Arms here. Since then, it's been reviewed by Occupie Fitzroy and The Good Hearted (who both loved it) and Chef John Smith (who admired the greasy vegan pub food, but wanted some decent healthy options).
____________
The Cornish Arms
163A Sydney Rd, Brunswick
9380 8383
vegan mains $17-$21
http://www.cornisharms.com.au/
Accessibility: There's a flat entryway and a pretty spacious interior. Lighting is low without being ludicrously dim. Ordering and payment happens at the bar. The toilets are on the same level and are wheelchair accessible.
Posted by Michael at 8:29 am