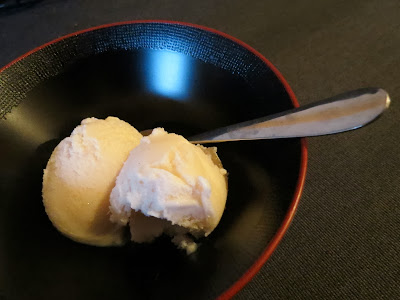 Four of Michael's aunts and uncles flew to Melbourne for a scorching few days of tennis, and we made sure to have them over for a meal in our chilled-out air-conditioned flat. Michael put on a summery Mexican-inspired spread of refried beans, tofu chicharrones, corn salad, tortillas and fresh veges, and I churned up this vanilla peach frozen yoghurt.


It's a surprisingly simple formula from the often-more-convoluted David Lebovitz. This time it was me complicating things, adding in orange essence, vanilla and a pinch of salt where Lebovitz listed only a simple dash of lemon juice. Thankfully I managed not to detract from the key feature: a bag of white peaches. You can see that they don't add much to the colour of this dessert, but I promise that they lend plenty of flavour.


The yoghurt is definitely secondary to the fruit - this comes off as equal parts refreshing sorbet and creamy dairy-based dessert. I'd love to try making it with coconut yoghurt as a vegan alternative.


The next day, transfer the peaches to a food processor and add in the yoghurt. Whizz the mixture until it's well mixed and mostly smooth. Add the lemon juice, orange essence, salt and vanilla, whizz again, taste and adjust the flavour as you like it.


Churn the mixture in an icecream maker according to the manufacturer's instructions.
Posted by Cindy at 1:28 pm