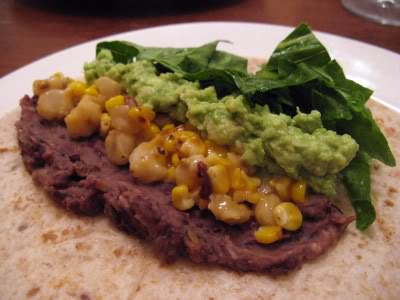 After reading gushing comments about Viva Vegan all over Twitter by the likes of Mandee and Zuckerbaby, Cindy and I decided it was time to add another recipe book to our pile. Its first job was to provide us with some ideas for a Sunday dinner with Cindy's aunt. Just flicking through Viva Vegan was an overwhelming experience - there are so many amazing-sounding recipes in it that choosing what to make became a long and frustrating process. We ended up doing a bit of ad-libbing and a bit of recipe following, and coming up with these burritos - filled with a mix of refried beans, spicy corn and hominy salad, greens and avocado. They were excellent, resulting in a bout of over-eating from me - there's something about beans and avocado that switches off my restraint.

Shuck the corn cobs and roast them whole over a hot fry-pan, turning every 5 or 10 minutes - you want the kernels to start blackening on the outside. Cool and then cut the kernels off the cob.

Make the dressing by combining the chipotle, adobo sauce, mayo and lime juice.

Combine the roasted corn, the hominy and about half the dressing (the rest is great as sauce on almost anything).

Heat the oil in a frying pan (preferably not a non-stick one, you're going to be mashing directly in the pan) and cook the garlic, onion and chillies for about 10 minutes, until everything is nice and soft.

Add the cumin, oregano and chilli powder and stir through.

Add the beans, bay leaves and 2 cups of the water, stirring everything together. Bring to the boil and then simmer for about 20 minutes, until most of the liquid is absorbed - you want to end up with a centimetre or so of water left.

Fish out the bay leaves and get rid of them, before mashing the beany mix with a potato masher - try to get them fairly smooth. Stir and cook for another 5 or 10 minutes, adding more water as things dry out.

Serve on warm tortillas, with a a few tablespoons of the corn and hominy salad, some smushed avocado (with a dash of lime juice and tabasco stirred through it) and some shredded lettuce.
Posted by Michael at 1:59 pm