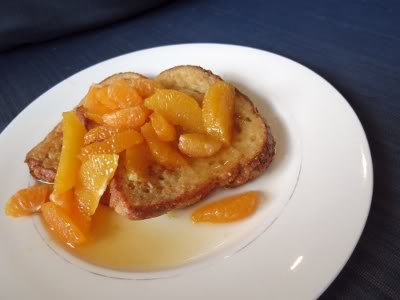 I've just run a search for 'French toast' on this blog and turned up cafe brunch after cafe brunch; there's nary a recipe to be seen. Actually, this old comment is evidence that I've been making vegan French toast at home for a good two years or more. I can't remember where I sourced my first recipe, because this bears little resemblance to the ones in Vegan Brunch. I think maybe Pip's version got me excited about using chickpea flour in the batter, and then I later refined my formula with vanilla and cinnamon thanks to Vicki.


Regardless, that formula is a winner, requiring little more than our standard pantry stores and Saturday morning rage. If chickpea flour isn't yet a staple in your kitchen, consider investing a couple of dollars and centimetres of shelf space on it - we've used it for lots of excellent 'eggy' batters in addition to some more traditional Indian recipes. Though they're also pantry standards, I haven't yet tried out Pip's savoury salt-and-pepper seasoning, nor Vicki's curious tablespoon of nooch in a sweet batch! No doubt you could sneak in any sort of spice you fancy. As it stands, this recipe tastes very much like the 'fried bread' I remember my mum making - a little crusty and caramelised on the outside, soft and cakey inside, with extra capacity for soaking up syrup.

My other French toast must-have is fruit. We've recently had a haul of citrus so I segmented up an orange, a tangelo and a mandarin, saving their extra juice and whisking it with a little maple syrup to pour over the top.


Place the chickpea flour in a bowl and very gradually whisk in the milk until smooth. Stir in the maple syrup, vanilla and cinnamon.


Heat half the oil in a frypan. Drop a slice of bread in the bowl to absorb the milk mixture, turn it over once and then transfer it to the frypan; repeat with a second piece of bread. Fry the battered bread for several minutes on each side, until lightly browned. Repeat with the rest of the bread and serve.
Posted by Cindy at 11:30 am