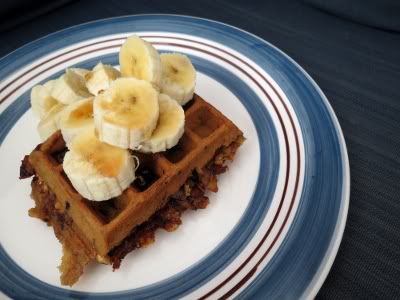 This breakfast is basically a dare. Michael joked that I could stuff some leftover coconut bacon into waffles, I was reminded of an Elvis cake that Lisa made earlier this year and, as if to spite Michael and common decency itself, I vowed to make Elvis waffles.


The formula wasn't all that complicated. I made the peanut butter waffle batter from Vegan Brunch, stirred in some coconut bacon, made an unholy mess with the waffle iron, then topped my waffle with a banana and slosh of maple syrup.


And it was... fine. Not amazing, not awful. It tasted like the things it was made of; they didn't clash revoltingly, they didn't meld into something new. While the concept was good for a laugh, the flavour of this dish was slightly less than the sum of its parts. That is, I think waffles and coconut bacon can both do so much more in other separate incarnations.
Posted by Cindy at 3:25 pm