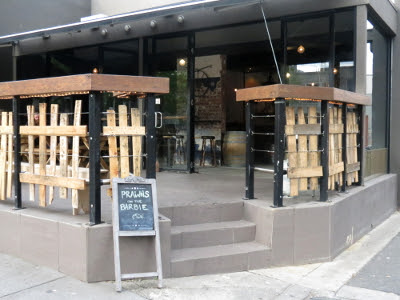 The sudden departure of the wildly popular South from the People's Market left a lot of veg*n Melburnites a bit sad. But, as The Simpsons have taught us, there's a fine line between crisis and opportunity, and Collingwood's loss is looking like being South Yarra's gain*.

The Sweetwater Inn is a new bar tucked off Chapel Street aiming to do for Australiana what South did for Americana. It's not an entirely vego place, but Shannon (ex-South and Gasometer) has been brought in to add a vegan dimension to the menu, and has come up with dishes covering Aussie classics like the rissole sandwich ($15), pineapple glazed ham steak ($15),  BBQ prawn skewers ($15), jaffles ($10) and bubble and squeak ($10). The fit-out is going for a sort of rustic outback vibe, with kegs for stools, old saws and a massive ceiling fan spinning lazily under a tin roof (there are also some mounted bull horns and the like, which I'm pretty sure weren't made out of tofu). There's a few interesting beers on tap and a range of cocktails with names like the drop bear and the black stump. 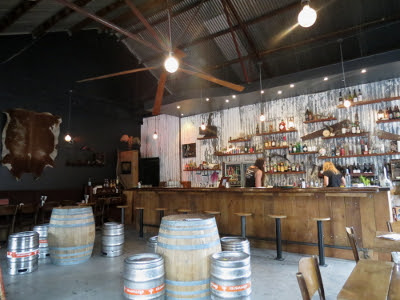 At 5:30 in the evening there's a very relaxed vibe, with the staff happy to chat as we figured out our order. Cindy is a complete sucker for faux fish and was never going to ignore the Fosters fish and chips (beer battered 'fish' served with a wedge of lemon and vegan tartare sauce, $16). 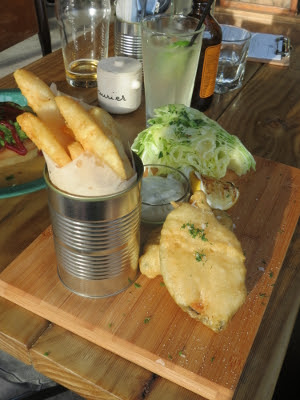 The chips were immediately familiar, having the same super crispy awesomeness of the Gasometer's offerings. The battered fish was also a success - a full layer of crunchy batter that managed not to be too oily while still having that satisfying deep-fried deliciousness. Cindy quickly annointed this her favourite vego fish and chips *of all time* (has the Gaso ever done fish and chips? We couldn't find a record of it across our nine Gasometer blog posts).

I almost braved the vegan prawns before remembering that I was never really a fan of actual prawns and taking on the wonders of the pie floater (a La Panella pie floating along on a sea of seasonal soup, piled with mushy peas, gravy and tomato sauce, $16). Seriously. 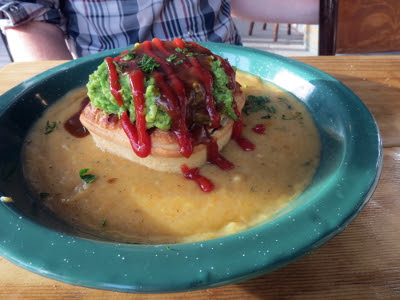 This was out of control. The 'soup' was like a gravy and mashed potato mush rather than the standard pea soup, with the Sweetwater Inn opting to pop the peas on top. There's nothing classy about ordering this, but I can't imagine anyone walking away disappointed.

The Sweetwater Inn is an excellent addition to Melbourne's vegan scene - a laidback bar offering up a ridiculous range of meals sure to leave junk-food lovers deeply satisfied. Here's hoping it thrives!

* Keep your eyes peeled for a South-related cafe/grocery store opening in Collingwood in the next few months.
____________

Mel from Veganise This! was the first to document Sweetwater Inn's vegan goodness. The Good Hearted were there the same night we were (but were quicker to get their post up - kudos!).
____________

Accessibility: There are three steps up as you enter. Things are reasonably well spread out, with seating a mix of high stools, low chairs and kegs. Ordering and payment is at the bar. We didn't visit the toilets.
Posted by Michael at 8:58 am