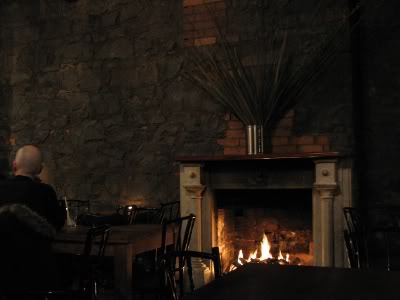 In late May the Gasometer Hotel announced a new winter menu and Michael promptly scheduled us in for a Pub Club visit. There's a distinctive whiff of Americana about it, with items ranging from latkes and matso ball soup through to southern fried chicken, corn dogs and Buffalo wings. A reassuring constant is clear labelling of vegetarian, vegan, gluten-free and diet-adaptable dishes.


I placed our order behind a couple of large groups and gave Gasometer's hot pear cider a go. (It's controversial - I loved it, though a few other in our group really didn't.) I was pleasantly surprised by the friendly service and prompt delivery of our dinner under the circumstances, especially after hearing many long-wait reports from others. 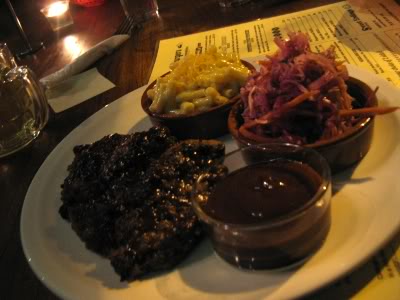 In an unusual twist Michael and I split our mains down the middle. I started out with the vegan bbq ribs ($18), choosing (the non-vegan version of) mac & cheese and apple slaw as our bonus sides. I couldn't fault it!  The seitan 'ribs' were tender inside, not at all rubbery, with a nicely basted exterior and a little chilli kick in the accompanying sauce. The mac & cheese was smooth and creamy without a hint of glugginess, and the coleslaw offered a nice pickley contrast. I was reluctant to pass the second half over to Michael and snuck a spoonful more mac than I was entitled to. 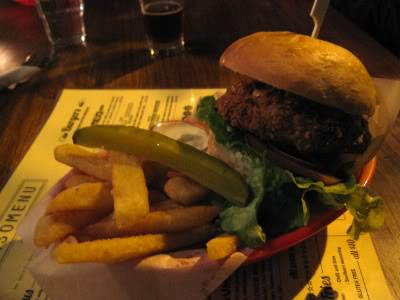 Little did I know that the second main was even better! The vegan southern fried chicken burger ($16.50) was phenomenal - the closest I've come to the (regretfully) beloved KFC burgers of my pre-veg days. And really, the quality of the bun and fixings here is so much better. Mostly, though, I was obsessing over the spiced crunchy and totally non-greasy crumbing on their home-made 'chicken'. 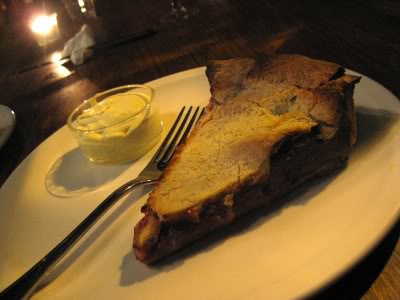 The dessert menu is distinctly pie-focused at the moment, and we shared a couple of them with friends (at roughly $10 apiece). While they were little more than a slice-and-serve proposition for the kitchen, they took a long time to arrive. The apple, raspberry and lemon one was very much to Michael's tastes, with quite a sour twang. 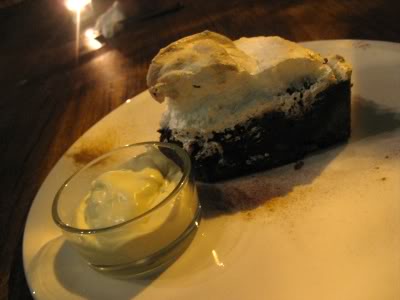 The Mexican choc cream meringue pie was pretty good - a touch dry, but with a lovely smooth chocolate filling and a smoky chilli finish. The meringue provided a bit more sugar than I needed, and I would almost have preferred simply to smother the pie in the cooling unsweetened cream instead.


While the desserts just barely delivered, our mains were exceptionally good. I reckon this is the best Western-style mock meat I've ever ordered. For serious. Vegos who avoid the mock might find joy in pierogi, stuffed cabbage leaves, pot pie and the range of sides, but I can't imagine deviating from that burger this winter.
____________


You can also read about our first, second and third visits to Gasometer. Since then, Gasometer has been reviewed by whereiatelastnight, and rated mentions on crosslegged on the front lawn and easy as vegan pie.
____________

Accessibility: The Gasometer has a small step on entry and quite well-spaced tables across a flat interior. Ordering and payment occurs at a high counter.
Posted by Cindy at 9:40 pm