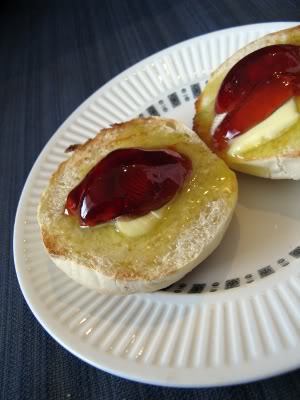 Michael shopped and made an excellent soup on Tuesday night, but he forgot to buy bread. I could have ventured back out to the supermarket or we could have done without, but instead I ferreted through the cupboard, located some dry yeast and flour, and got baking. I'd been thinking about making Wanting Kneading's English muffins for breakfast anyway and this was a good excuse to give it a go.
Since this is a yeast-based recipe, one needs a little patience for proving. Sitting my dough near the oven (which was warm and roasting onions), I was concerned that it didn't seem to be expanding much. I needn't have worried as my muffins puffed up impressively once they hit the hot frypan. After a few minutes developing that bit of crust the muffins get finished off in the oven. What comes out is pretty special - the moment you slice one open it unleashes a mighty waft of steam. The centre is quite dense, but very soft and just begging for some butter or margarine to melt right in.
Unfortunately they firmed up pretty rapidly, being a toast-only option by the next morning. (Again, maybe a microwave would help out here?) After a couple of photos I piled the remainder into our freezer. 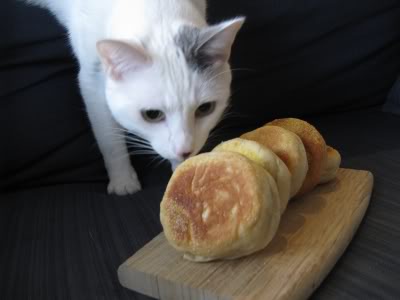 Our other housemate, Zimbra, has turned food critic this week. After two years of absolute disinterest in hooman fud he's begun obsessively sniffing at (though never tasting) everything we ingest. He's also a huge fan of cat grass, hinting at vegetarian tendencies. Rest assured, we're a long way from inviting a sarcastic feline to guest post on where's the beef?, but there may be more photobombs.

English muffins
(found at wanting kneading, who got their recipe from allrecipes.com)


Heat the milk in a small saucepan until it starts to bubble. Take it off the heat; stir in the sugar until dissolved then the margarine until melted through. Allow the mixture to cool down to lukewarm.
In a large bowl, dissolve the yeast in the warm water and let it stand for 10 minutes.
Whisk the milk and half the flour into the yeast mixture, beating until smooth. Add the salt and gradually stir in more flour until you have a soft dough (I stopped 1/2 cup short of the recommended 6 cups). Knead the dough gently, then place it in a greased bowl, covered with a teatowel, to rise in a warm place for half an hour.
Prepare a couple of baking trays with paper and sprinkle them with polenta. Punch the dough down and roll it out to just 1cm thick. Cut circles from the dough, about 8cm in diameter, using a biscuit cutter or drinking glass, and place them on the baking trays. Dust the tops of the muffins with more polenta, cover the trays with a teatowel each and allow the muffins another half hour to rise.
Heat an oven to 130°C, and a frypan to medium-high heat.Lightly spray the frypan with oil and fry the muffins in batches, allowing both sides to crisp up a little. They'll probably puff up a bit too. Transfer the fried muffins back to their baking trays and bake them for about 15 minutes, until cooked through.
Posted by Cindy at 1:44 pm